Will so-called seculars, liberals and media speak anything about this ? Imagine if any politician makes such statement against Islam or Christianity in Hindu majority India, then what would be their reaction ! – Editor, Hindujagruti 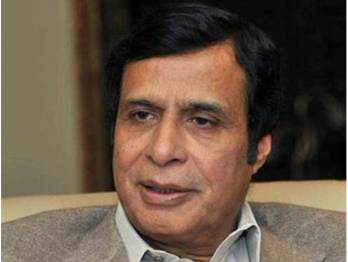 Assembly Speaker Chaudhry Pervaiz Elahi from Pakistan’s Punjab province on Wednesday made a shocking remark against the construction of a temple in Pakistan’s capital Islamabad claiming that Pakistan was created in the name of Islam and construction of a new temple in Islamabad was not only against the spirit of Islam but also an insult to the ‘Madina Riayasat’, a reference to the Islamic welfare state that Pakistan aspires to be.

Chaudhry Pervaiz Elahi strongly opposed the construction of Hindu temple saying that it is not only against the spirit of Islam but is also an insult to the Islamic State of Pakistan. He reportedly added that after the victory of Mecca, Hazrat Muhammad along with Hazrat Ali broke 360 idols in Baitullah Sharif and said, “Haq Aya Aur Batil Mit Gaya Baishak Batil Mitney Wala Tha.”

“Pakistan was made in the name of Islam and building another Hindu temple in the capital is against the soul of Islam,” said Punjab Assembly Speaker Chaudhry Pervaiz Elahi.

Construction of a Hindu temple in Islamabad is getting a lot of heat. A lawyer has challenged its construction in IHC, while fatwas against it continue. Here's an ally of govt Pervaiz Elahi opposing construction: Making a new mandir in the capital is against the spirit of Islam. pic.twitter.com/ZV2nwVXvbx

Petition filed in the Islamabad High Court against construction of temple

The shocking statement from Elahi comes at the backdrop of a petition filed in the Islamabad High Court (IHC) against the construction a temple saying that a temple for Hindus already existed in Saidpur and the government, instead of constructing a new temple, should renovate the old one.

The petitioner further said that the government had no funds for the construction of a mosque but released funds for building a temple. On Tuesday, the Islamabad High Court had issued notice to the city development authority over the petition filed by a lawyer named Chaudhry Tanveer Akhtar.

The proposed temple at Islamabad was to be the first temple to be built in the Pakistani capital city ever since Islamic country came into existence in 1947. The Islamabad city authorities had allocated a 20,000 sqft plot for the construction of the temple.

During the groundbreaking ceremony, Parliamentary Secretary on Human Rights Lal Chand Malhi had said that a temple is being constructed in the capital as the Hindu population has been increasing considerably in the past two decades, making it important to make a temple for them.

“The Hindu community in Islamabad has been demanding a temple for a long time now. The population has also increased while many Hindu temple structures in the capital have been abandoned,” Chand Mahi added.

Following the decision of Pakistan government to build the temple in Islamabad, Mufti Zia-ud-Din of the Lahore chapter of Jamia Ashrafia, a leading cleric in Pakistan has issued a “fatwa” against the construction of the temple, calling it “un-Islamic”.

The fatwa claimed that while the repair of an existing structure for non-Muslims is allowed, construction of new places of worship is not permitted in Islamic nations.