The Municipal Corporation of Greater Mumbai, also known as Brihanmumbai Municipal Corporation (BMC) has removed the illegal loudspeaker belonging to the Noori Ilahi Sunni Welfare Association’s mosque in Mankhurd, for which the Mumbai police under the Maha Vikas Aghadi government in Maharashtra had on June 29 issued a notice to Karishma Bhosale and her mother for requesting the mosque authorities to lower the volume of loudspeaker that blared azaan.

Karishma Bhosale who had objected to the volume of azaan that blared through the loudspeakers installed in her neighbourhood has taken to Twitter to confirm the news.

Happy that the efforts of all people led to the victory of this #संविधानिक_सत्याग्रह
Led by @sanvidhanik hakka kruti samiti the Movement for restoration of #ConstitutionalRight of the citizens by removal of#IllegalMosqueLoudSpeakers was successful pic.twitter.com/Z9jmikGR0x

BJP’s Mumbai General Secretary Vivekanand Gupta, who had also supported Karishma Bhosale in her protest against the illegal use of the loudspeaker by the mosque in Mankhurd, also took to the microblogging site to share the news.

The illegal loudspeaker,at Mankhurd, for which #Karishma Bhosale agitated has been removed. ? pic.twitter.com/5b64BqQdGP

BMC removed the loudspeaker that is fine, but actually Mumbai police should have done it: Adv. Vivekanand Gupta on the removal of loudspeaker in Mankhurd

When OpIndia spoke to Adv. Vivekanand Gupta, he said that the task which the Mumbai police should have done in the month of June was ultimately carried out by Brihanmumbai Municipal Corporation (BMC) today. He apprised that the pole on which the loudspeaker was fixed, stood on BMC’s road, because of which the civic body had put up a notice somewhere in the month of July, informing the mosque that if they did not remove the illegal loudspeaker at the earliest, it would be removed by the civic body. And today the Municipal Corporation finally removed it, confirmed Gupta.

Gupta asserted that though many Hindu organisations, like VHP, Bajrang Dal and Durga Vahini Sena had supported Karishma Bhosale in her endeavour and provided her protection from the local Muslim who had ominously intimidated her for requesting to lower the volume of azaan, BJP’s Kirit Somaiya had specially put in a lot of effort and provided all kind of support to Karishma.

The notice issued by Mumbai police on June 29 was addressed to Karishma’s mother, Varsha Ganesh Bhosale, which stated that it was inappropriate on the part of Karishma to have visited the Noori Ilahi Sunni Welfare Association’s mosque in Mankhurd and asked its authorities to reduce the volume of azaan that blared through its loudspeaker.

The notice read that such acts pose a threat to “law and order situation” in the region and directed Karishma and her mother to abide by the rules, failing which they will be booked under Section 188(Disobedience to order duly promulgated by public servant) for violating the notice served under Section 149 and appropriate action will be initiated against them.

We reported how Karishma Bhosale, a resident of Mankhurd, was accosted, heckled and intimidated by a raft of belligerent Muslims after she visited the Noori Ilahi Sunni Welfare Association’s mosque with her request. In a series of tweets, Ms Karishma expressed the ordeal she had to go through at the mosque on Twitter. 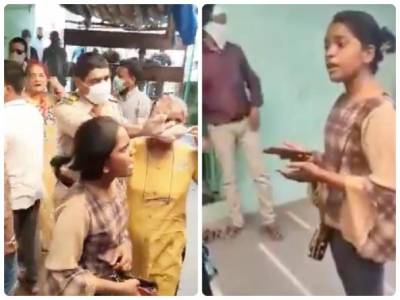 A girl in the Mankhurd region of Mumbai was bullied by Muslim residents for raising her voice against the blaring of azaan in high volume from a neighbourhood mosque in her area.

The victim, Karishma Bhosale, living in Mankhurd, had visited a nearby mosque to convince the authorities to lower the volume of the azaan that blared through a loudspeaker installed right in front of her window. However, when she reached the mosque with her plea, a raft of belligerent Muslims accosted her and intimidated her for requesting to reduce the volume of azaan.

In a series of tweets, Ms Karishma expressed the ordeal she had to go through at the mosque on Twitter. She alleged that within minutes of visiting the mosque for asking them to lower the volume of the loudspeaker, scores of people gathered in the mosque, including men and women and entered into an altercation with her.

When i first approached the so called authority,look how many people are gathered within time pic.twitter.com/hQI2N705Vl

As can be seen in the above video, a Muslim woman gets in a war of words with Ms Karishma, presumably to intimidate her for registering her disapproval against the high volume of azaan roaring through the loudspeakers.

In the subsequent tweets, Ms Karishma shared videos from the mosque where patrons of the mosque were seen shouting slogans against her in presence of the police officials who were trying to pacify the situation.

Even the MLA has spoken this way..he is asking us to leave this residence if we cant bear the high
volume of azaan..who shall we rely upon then.. pic.twitter.com/s50y93bOLs

In the ensuing commotion, it can be seen that the police officials walk her out of the mosque premises even as people keep shouting and intimidating her. One of the voices in the background ominously shouts, “Masjid tere baap ki hai kya?” which roughly translates to “Is the mosque owned by your father”. The crowd gathered at the mosque went berserk and even police officials who were at the spot to placate the emotions had to bear the brunt of the fury of Muslims in the mosque.

Furthermore, the girl has also shared a Whatsapp message in which Mankhurd MLA Abu Azmi has reportedly asked the victim to leave her residence if she has a problem with the sound of azaan. Azmi reputedly accused the victim of inciting riots by raising her voice against azaan.

“When questions were raised on azaan in Mankhurd, Muslim men and women reached the police station to register their protest. My dear friends, this is the way, traitors in the country try to stoke riots between Hindus, Muslims and people from other castes,” a Whatsapp message attributed to MLA Abu Azmi read.