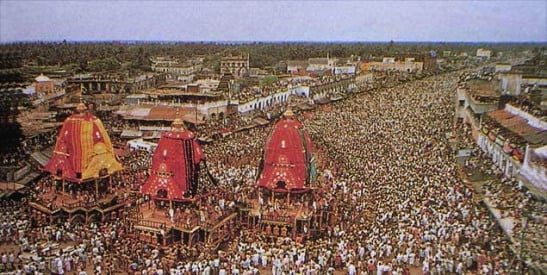 Bhubaneswar/New Delhi/Puri: The power of the Lords has finally got the SC moving and also the decision for the chariots to roll on Puri Badadanda a few hours later tomorrow. After 9 review petitions were moved in the SC to get a nod to let the centuries-old Rath Yatra going, the apex court today modified its previous directive and gave a nod to the grand festival though with the ryder that the whole affair will be held without any public participation in view of COVID-19 pandemic.

On Thursday, the Supreme Court in a landmark directive had stayed Rath Yatra asking to limit all rituals to the temple premises. The decision had shattered the hopes of all devotees, servitors, and people cutting across several sections of the society.

Puri Rath Yatra will be held in coordination between the Puri Temple committee, Odisha and the Central government without compromising the health issue, the SC maintained adding that the State government can even stop the Rath Yatra.

The Centre and the State government earlier today sought permission from the SC to conduct Rath Yatra with precautions. Solicitor General Tushar Mehta, mentioning the matter before a bench headed by Justice Arun Mishra, said that the entire festival can be telecasted live adding, “If Lord Jagannath will not come out tomorrow, he cannot come out for 12 years as per traditions.”

During the SC hearing today, the SG said that the belief needs to be taken care of so that health is not compromised and said the State govt has also stated that Rath yatra can be limited to Puri temple alone.

Harish Salve, while representing the Odisha government, said, “We will coordinate with the temple committee and the Union too. If we need help, we will reach out to the centre. It can be taken on record.

Hearing the case, the CJI said that Rath Yatra was earlier stayed by the court in view of COVID-19 and an anticipated gathering of 10 to 12 lakh devotees.

Moreover, as per the direction of Prime Minister Narendra Modi, Home Minister Amit Shah today held a discussion with Puri Gajapati Maharaj Dibyasingha Deb over the conduct of RathYatra and inquired about the arrangements made for the annual sojourn of the deities.

Meanwhile, Pujapanda servitors today brought ‘Agyan Mala’ to the chariots on the Ratha Khala in Puri for their initiation and performed the Agyan Mala Bije rituals.

Days after welcoming the Supreme Court order on the cancellation of annual Rath Yatra of Lord Jagannath at Puri, the BJP has now taken an u-turn on Saturday after it asked the Naveen Patnaik-led Odisha government to look for ways to conduct the Rath Yatra without much crowd on June 23.

Speaking to a local media, state BJP president Samir Mohanty appealed to the state government to take steps according to Puri’s titular king Dibyasingha Deb’s proposal for the conduct of Rath Yatra in Puri. He also added that the Odisha government should also discuss the matter with Puri Shankaracharya.

The Supreme court on Thursday had stayed the Rath Yatra, which was to begin on June 23. The apex court had also stopped all activities related to the festival, in the wake of the coronavirus pandemic.

“We have to accept the reality that the pandemic is at its high during the month,” BJP state president Samir Mohanty had said.

However, BJP has now taken an u-turn on the issue and has advised the state government to hold a “devotee-less” festival, instead of cancelling as suggested by Gajapati Maharaj Dibyasingha Deb.

Gajapati Maharaj Dibyasingha Deb who is the titular king of Puri and considered the first servitor of Lord Jagannath, Puri Shankaracharya Swami Nischalananda Saraswati and other associated with the Shree Jagannath Temple had urged the state government to hold the festival without the presence of devotees.

Addition to that, they had asked the Naveen Patnaik-led government to bring an ordinance to overrule the Supreme Court order, as was done by the government in the case with the practice of Jallikattu, a bull-taming sport, in Tamil Nadu.

#SaveRathYatra
Whether certain facts were concealed from #SupremeCourt ? Such as order of #Odisa HC and the detailed preparations of the #RathYatra isolating hundreds of sevaks ?

Fraud played on crores of #Hindus ?
Will be testing in SC again@ReclaimTemples @HinduJagrutiOrg pic.twitter.com/OUaM2kldkp

#SaveRathYatra
Queues before liquor shops are permitted, whatever distance long !

Meanwhile, the opposition political parties in the state have attacked the ruling Biju Janata Dal (BJD) government for its failure to convince the Supreme Court to conduct the annual event without any crowd.

Dibyasingha Deb, who is also the chairperson of the Shree Jagannath Temple Managing Committee, said that the Naveen Patnaik-led state government did not properly apprise the Supreme Court of plans to hold a crowd-less festival this year.

The committee had earlier recommended to the state government that a devotee-less Ratha Yatra was possible as was done during the Lord’s ‘Snan Purnima’ (bathing rituals) on June 5. Deb further said the devotees can witness the festival through television as it has been done during the Snan Purnima.

Instead of opposing the petition seeking cancellation of the Ratha Yatra, the state government’s counsel seemed to have supported it which led to the passing of an order to stay the festival, he alleged.

Deb said the managing committee and the Chhattisha Nijog have urged the state government to file another application in the Supreme Court for altering its June 18 order to allow them to conduct the festival in a restricted way.

The annual Jagannath Rath Yatra which was slated to take place in Odisha on June 23 was stalled by the Supreme Court this year citing the Covid-19 pandemic situation.

The PIL was filed on June 15 by Bhubaneswar-based NGO ‘Odisha Vikas Parishad’ stating argued that holding the annual chariot festival, which attracts almost 10 lakh people from across the country and abroad would be an open invitation to infect lakhs of devotees given the spiralling number of coronavirus patients in India, including Odisha.