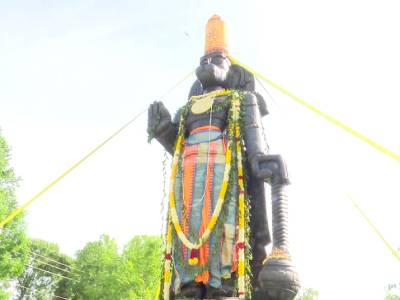 A 25 feet-tall-statue was of Shri Hanuman was reportedly unveiled in the city of Hockessin in Delaware, United States on Monday. It is the tallest Hindu statue in the North American country now and the second tallest religious statue in Delaware, next only to Our Lady Queen of Peace statue. The sculpture, carved from a single block of granite, weighs more than 30,000 kg and is 25 feet tall.

The Hindu statue cost more than $1,00,000 and was procured from Warangal, Telangana. The handcrafted statue was chiselled by more than a dozen artisans and took almost a year to complete. It was then transported from Hyderabad to New York by ship and to then to Delaware via a truck.

The installation process was organised by temple priests for over 10 days and more than 300 Hindu families who donned orange T-shirts that read, ‘The hanuman Project.’ Reportedly, a priest from Bengaluru named Nagraj Bhattar performed a purification of the idol with rice, water, and flowers.

This was followed by puja for divine intervention, amidst the Coronavirus pandemic. Senator Chris Coons, New Castle County executive Matt Myer, and Lt. Governor (Delaware) Bethany Hall-Long was present during the unveiling of the statue and sought blessings at the temple.

US: A 25 feet tall statue of Lord Hanuman has been installed in Hockessin, Delaware. Patibanda Sharma, President, Hindu Temple of Delaware Association says, “It weighs around 45 tonnes. It has been shipped from Warangal, Telangana to Delaware.” pic.twitter.com/KlWIEgKRCX

“Once the statue is made according to a prescribed process by an artisan and is delivered to the temple, the temple priests normally conduct a 10 day, a 5 to 10-day rituals, mostly involving fire offerings and other rituals. And also the community is invited to bond with the statue,” the president of Hindu Temple Association, Patibanda Sharma, was quoted as saying. He added that two Hindu rituals namely, ‘Yantra Pratishtha’ and ‘Prana Prathista’ will be performed for the correct installation of the idol.

Sharma also thanked non-Hindus who helped in erecting the mammoth statue of Shri Hanuman. He said, “It is a big tribute to all the people who handled the idol, we have been very fortunate, I must say whenever we have any contract, whether it is crane operators to lift or concrete operators to install. I am not exaggerating, they take more than more care than we do ourselves… very careful about handling the statue, and being respectful, that’s more important.”

Owing to the Coronavirus pandemic, special arrangements have been made to avoid large gatherings. Devotees would be allowed in batches to offer their prayers and the idol would be made open to people of all Faiths in the upcoming days. Visitors need to signup on the temple’s website to book their preferred time slots.

The temple was established in 1996 and is frequented by thousands of practitioners of the Hindu Faith. The temple reportedly provides spiritual, wedding and catering services with the help of a network of volunteers. The statue of Shri Hanuman represents strength and victory over evil.