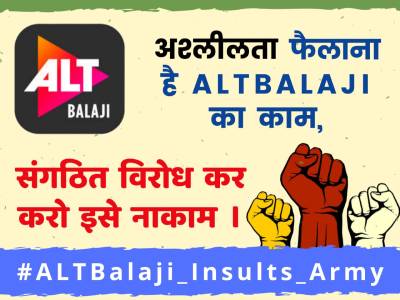 Let’s have a look how people reacted against the sins of ALT Balaji :

All Nationalist pl join this campaign ! This is not only to support Military but to empower Nation on Eve of China's intention to attack ! @PMOIndia

Signature Campaign : Appeal to set up a regulatory authority for Web Series ! https://t.co/y0GLEzisxk

The Indian Army is a patriot and hinders the work of anarchic spreaders in India.

That is why India's leftist, secularist and Islamist powers humiliate the army. This is their anti-country agenda.

O India get organized against this conspiracy. pic.twitter.com/iqjglm1ve6

#altbalaji must punished for such acts described in Video. As
#ALTBalaji_Insults_Army Jago Hindu Jago ..no other community cares about such issues but we must protest, its our national duty @HinduJagrutiOrg @Vishnu_Jain1 @SG_HJS @HinduMandirLive @IndINDIANARMY @Ramesh_hjs pic.twitter.com/FSBTQEmOib