Kapoor, the founder of ALTBalaji, which is owned by her production house, Balaji Telefilms, said their organization is “deeply respectful” of the Indian Army and apologized for hurting any sentiments unintentionally.

A video of the producer’s outrage against cyber-bullying has surfaced online where she can be seen addressing an unconfirmed person, though the context is unquestionable. She has revealed that the controversial content has been removed and also apologized to the Army officers’ wives.

Last week, Bigg Boss 13 fame Vikas Pathak aka Hindustani Bhau had filed a police complaint at the Khar Police Station in Mumbai against TV Czarina Ekta Kapoor and her mother, Shobha Kapoor. He had expressed his outrage over a particular scene in the show where an officer’s wife is seen having relations with another man dressed in the Army uniform.

Taking note of the scene, Martyrs Welfare Foundation (MWF) also raised strong objections against the show and stated that Army soldiers sacrifice their lives for the country, but the series’ producer and director have depicted that Armymen’s wives are intimate with other men at home when their husbands are away serving on the borders. They claimed that the show insults our armed forces and military personnel by portraying scenes where uniforms of military men, with symbols of Ashoka statue and Taj, are torn apart.

A day after social media celebrity Vikas Pathak, who is popularly known as ‘Hindustani Bhau’ filed a police complaint against TV producer Ekta Kapoor and her mother Shobha Kapoor over allegations of inappropriate sex scene and disrespecting the Indian Army in a web series, the popular Youtube star said that he has been getting calls from numerous people asking him to “sit and talk”.

Vikas Pathak aka Hindustani Bhau shared a video on Instagram on Tuesday alleging that he is getting calls from several “big people” who are requesting him to talk and solve the issue.

“Yesterday, I filed a police complaint at Khar Police Station against Bollywood’s renowned ‘Ek Thi Kabootar’ Ekta Kapoor. I have been getting so many phone calls from yesterday as if Ekta Kapoor runs their household and sends them ration.” said the former Big Boss contestant in his Instagram video.

Pathak said that nobody can buy him with money and added that people who are making such requests should be ashamed. The YouTuber added that not just him, but the police who are investigating the case against Ekta Kapoor is also in pressure.

ALT Balaji shot into the Indian web series scene with unregulated content featuring mostly sexual content including scenes of adultery, incest, rape, homosexuality and multiple sex partners. Morally corrupt as the series is, this time around ALT Balaji has stooped to a new low. A new season of its show X.X.X Uncensored shows a Lieutenant Colonel’s wife seducing her civilian doctor (saying that the husband is only interested in his drinks and spending time with fellow officers), dressing him up in her husband’s uniform and then spanking him in a role-play (where she addresses the doctor as her husband). She rips open the uniform shirt too. Later it turns out that the woman is the doctor’s mother-in-law. First the doctor started the adulterous relationship despite knowing that the woman was married, and secondly the woman continued the relationship even after his marriage. This is sickening because ALT Balaji seeks to normalise that

While ALT Balaji’s hunger to make money drives their extremely poor decisions in selecting content that is served to a wide audience (easily impressionable minds of the youth are exposed to this content without any checks and balances), they forget that

So, ALT Balaji must apologise to the nation for debasing the dignity of the Armed Forces and immediately withdraw the series from all platforms. 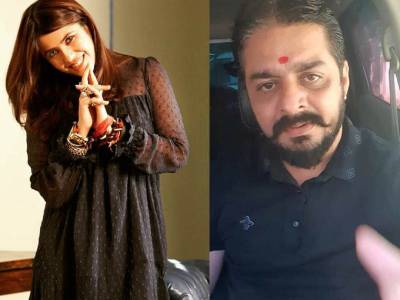 Sharing that he has filed a complaint against Ekta and Shobha Kapoor at the Khar police station, Bhau went live on Instagram. He said that the web series had a woman indulging in a physical relationship with her boyfriend, while her husband, who is a soldier, fought on the border.

“Our army is our pride and the woman indulges in a sexual act with a man, who wears her husband’s uniform. This is shameful as they have made a joke of our soldiers,” shared Hindustani Bhau. He added, “The police has assured that they will investigate the matter, and keep me updated about the same.”

Signature Campaign : Appeal to set up a regulatory authority for Web Series !

The YouTuber has asked the producers to issue a public apology for the same.

Hindustani Bhau’s real name is Vikas Pathak. He gained fame after uploading videos on YouTube, which he defends as an act of love for the country.