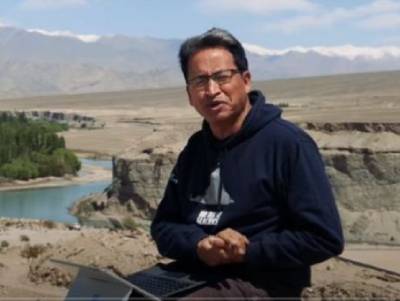 On Friday (29 May), Sonam Wangchuk, Ladakh based innovator and education reformist, and the inspiration behind the character Phunsukh Wangdu in the movie 3 Idiots, has taken to his Youtube channel to urge fellow Indians to boycott Chinese products, in the wake of the military standoff between India and China at the LAC (Line of Actual Control) in Ladakh.

In his video that has now gone viral on social media, he has advocated fighting China on two fronts – one with bullet and the other with the wallet. Wangchuk said, “Whenever there is tension on the border, we sleep peacefully believing that our army is there to fight the army But, this time, civilians too need to give an answer to our enemies on the border.”

The engineer turned education reformer explained that the Chinese aggression is not limited to India. Earlier, it had exercised its control and dominance over Hong Kong, Vietnam, and Taiwan, located alongside the South China Sea. According to Sonam Wangchuk, China’s hostile attitude can be attributed to its internal politics. Owing to fears of a mass uprising, the Chinese Government had taken an aggressive geo-political stance to pacify its citizens.

“The Chinese autocratic Government is scared of its 140 crore people who work as bonded labourers, with no human rights, for the government. They fear that the rising dissatisfaction amongst people can lead to a revolt against the Communist regime. Amidst the Coronavirus pandemic, China has been forced to shut down its factories. The unemployment rate has soared as high as 20%. Therefore, the hostile attitude of China towards neighbouring countries is a part of a ploy to keep the country united,” Wangchuk was quoted as saying.

He informed that the 1962 Indo-Sino War was also one of the tactics adopted by the then Chinese government to deviate public discourse from the failure of the administration to respond effectively to the famine that lasted between 1957 to 1962. Wangchuk added that the autocratic government knows that if there is a shrinkage in the Gross Domestic Product (GDP) growth or that of the country’s prosperity, a mass uprising is inevitable.

India has a trade deficit of around ₹4.2 lakh crores with China. “The money spent by us on Chinese products will be used by the Government to arm their soldiers. We should not be funding the martyrdom of our own army personnel,” he concluded. Wangchuk explained as to how the economic boycott of Chinese products by 130 crore people living in India and 3 crore Indians living abroad can have on the Chinese economy.

“There is growing disdain for China among several countries. It is quite possible that the economic boycott by Indians alone can provoke other countries to follow suit. If the boycott of Chinese products takes place on a global scale, then, the fear of the Chinese Government of a mass rebellion will come alive,” the education reformer noted. He said that a failure to execute the said plan would imply that we are indirectly funding the ammunition of the Chinese army. Besides Chinese Hardware, Indians use Chinese apps such as TikTok that generate crores in revenue for Chinese businesses.

Sonam Wangchuk also cited the example of Prime Minister Narendra Modi’s ‘Aatmanirbhar Bharat’ and explained how the boycott of Chinese products can turn out to be a boon for the Indian economy. He reiterated that such a campaign will encourage Indian businesses. The social innovator displayed optimism and highlighted that buying indigenous products will ensure prosperity in the country and jobs for millions of skilled workers.

Leading by example, he decided to stop using his “Made in China” phone within a week and urged fellow Indians to uninstall Chinese apps in a similar way. He conceded that disposing of hardware might take long and as such provided a time frame of 1 year to start using indigenous products. “When millions of people will uninstall Chinese apps, it will send a clear message to China to mend its ways,” he emphasised.

The Standoff at LAC

About 5000 Chinese army personnel, under the garb of a military exercise, diverted their movement towards the Indian side of the LAC (Line of Actual Control). The current stand-off began on May 5-6 and has been continuing all along the LAC up to Sikkim. Sources told ANI that the behaviour of Chinese troops had been reminiscent of the stone pelters in Kashmir who are funded by Pakistan. The Chinese troops came armed with sticks, clubs with barbed wires and stones in an area near the Pangong Tso lake during a face-off with Indian troops there, the source revealed.