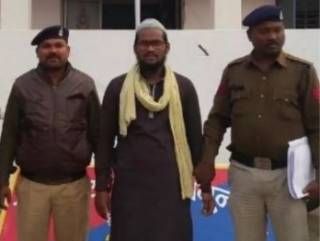 In their propensity to shield Muslim perpetrators, media organisations often resort to chicanery by withholding complete details and leaving out the identities of the criminals altogether. However, of late, there have been concerted attempts made by many media outfits to not only conceal the names of Muslim perpetrators but also give them a Hindu spin to depict that the crime was committed by Hindus.

Recently, the Internet was awash with a picture of a report from 2019, where a media organisation unscrupulously endeavoured to cover up the crimes committed by a man belonging to the minority community. The case pertained to a distraught woman in Bilaspur suffering from the agony of an estranged husband and family problems. To overcome her agony, she reached out to a Muslim scholar named Aslam Faizi and sought his help. Aslam first forced her to have a sexual relationship with him and later assured her that all her problems will be solved now.

A few days later, when her husband did not return and her family problems continued to mount, the woman realised that she had been raped by the Muslim scholar who exploited her condition. The woman immediately went to the police and filed a complaint of against Aslam Faizi. The police registered a case under section 376 of the IPC against the accused.

The police investigation later revealed that Aslam Faizi alias Suhail Raza, a resident of Manendragarh-Chirmiri, was a cleric of a mosque. He lived on rent in Pendra and claimed of curing people by witchcraft. During the investigation, it was found that Aslam was not only known well-known in his village but also scores of nearby villages. The 34-year-old victim also heard about Aslam’s supposed ability to alleviate people of their miseries and approached him in a bid to assuage her concerns. When Aslam first heard about the troubles endured by the woman, he took her in the room under the pretext of relieving her of her problems and established sexual relations with her.

While the accused was patently Muslim, several media organisations, including Nayi Duniya, gave the entire incident a Hindu spin by describing the alleged rapist as “Tantrik”– a practitioner of the “tantra vidya“, who is mainly associated with Hinduism, leading to a perception that the crime was committed by a Hindu individual. Moreover, an image of a Hindu priest was used to characterise the Muslim sorcerer who had allegedly committed rape by coercing the victim.

Media organisations have often pulled such deceitful tricks to safeguard the Muslim community while Hindus are made to bear the brunt. There have been multiple cases when the identities of offenders belonging to minority communities are blocked out and descriptions of them being Hindus are rendered in the media.

Last year, several media organisations attributed the death of a 10-year-old boy because of the rituals performed by a Muslim healer to a “Tantrik”. While the death of the child occurred due to a Muslim healer, PTI report gives an obvious Hindu slant to the headline and calls the Muslim healer a ‘Tantrik’. This headline was then carried by many media houses such as NDTV, India Today, The Tribune verbatim without changes.

India Today, in fact, went a step further and even used a rather ‘Hindu looking’ featured image for their story that appeared as if the ritual itself was Hindu. 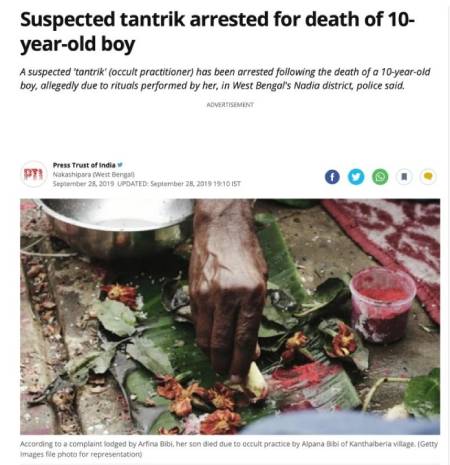 There are several times in the past that the media has resorted to such chicanery. As per a Hindu report, a woman had accused a “tantrik” of raping her in Ajmer, after taking her their on the “pretext of offering prayers at a Dargah“. In the same month, Times of India had carried an article titled, “Tantrik gets 10 years in jail for rape and extortion”. Like the reports mentioned above, the name of the accused was “Warsi”.