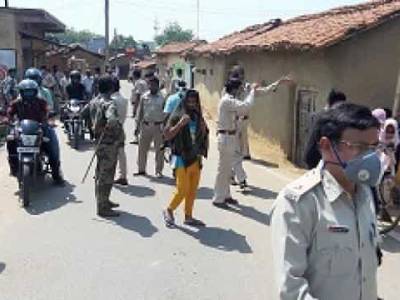 Despite restrictions have been imposed on religious congregations across the country, the jihadi mobs have yet again defied the lockdown orders by not only gathering at Mosque for Friday ‘Namaaz’ but also resorted to violence.

According to the reports. more than 200 people gathered at a Mosque to offer ‘namaaz’ at Narayanpur under Pindrajora police station in Bokaro district in Jharkhand on Friday despite there is a ban on religious congregations. As the local police reached the mosque area to disperse the crowd, the jihadi mob attacked the policemen.

The violent mob then resorted to stone-pelting against police personnel leading to injuries to some of the police officers. The mob also ransacked the PCR Van, broken the glass.

According to Bokaro SP Chandan Kumar Jha, “After receiving the information that people had gathered to offer namaaz at Narayanpur mosque amidst lockdown, our police team rushed on the spot and saw a lot of crowds there. Our team appealed not to increase the crowd and asked them to follow the lockdown norms.”

The cleric of the mosque and few namaazis have been arrested for violating the lockdown norms. The situation is now under control, said the police officials.