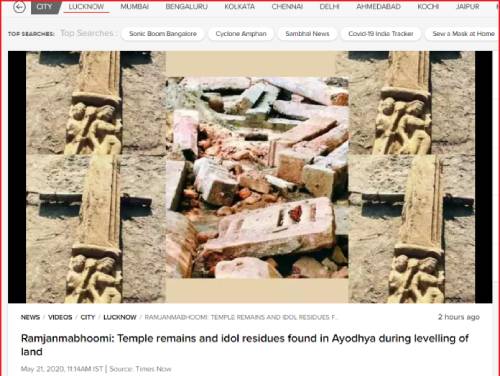 In Ayodhya, the hallowed ground is now being dug up and readied for construction. After being buried under ‘Ganga Jamuni Tehzeeb’ for five hundred years, India’s real history is speaking up.

For 70 years after independence, a powerful lobby of leftist historians and archaeologists tried to keep a lid on these voices. But they failed. For everyone who believes in justice and truth, it is a moment of triumph.

However, it is important to remember that the victory is not complete simply with the verdict from the Honorable Supreme Court. Victory is not simply in building a grand Ram Temple at Ayodhya.

Real victory lies in establishing a full documented history of what happened to generations of oppressed Hindus in India. For this, the evidence has to be curated, preserved and presented in compact fashion for the whole world to see and remember.

The lobby of leftist historians may have lost this round after 70 years, but they are not done yet. Their much bigger plan was to bury the history of how Hindus were oppressed for hundreds of years. This bigger plan is still very much up and running. That is why they are creating canards accusing the Supreme Court of deciding on sentiments instead of facts. They are trying to relate the victory to the political success of the BJP and its “Hindu nationalism” which they have defamed across the world.

In other words, leftist historians want the world to think that oppression of Hindus never happened.

Undoubtedly, this has parallels with holocaust denial. And as in many other spheres, we can learn from the Jewish people how to effectively counter such propaganda.

The generation of Jewish people that survived the holocaust vowed two things to themselves. First, they would build a great and glorious Jewish nation. Second, they would make sure the world never forgets what happened to them.

Towards the second aim, they made sure every bit of evidence about the holocaust was carefully collected, documented and preserved. That holocaust memorial museums were opened all across Europe. That every generation of school kids would go to these museums and see for themselves what happened. So that the great atrocity against Jewish people would forever prick the conscience of humanity.

They anticipated that holocaust deniers would eventually appear and try to work their propaganda. Public memory is never particularly good. With time, there is a danger of real history getting lost in a battle of narratives. So you have to keep the documented history fresh and real and before the eyes of the public.

In India, we Hindus face a similar threat. A lobby of left wing propagandists works non stop to deny all historical evidence of Hindus being oppressed in this land. They impose on us the fantasy of ‘Ganga Jamuni Tehzeeb.’ Because they know they are lying, they wouldn’t let us dig up the ground in Ayodhya.

The historical evidence is everywhere. But they wont let us talk about it or use the correct words for it.

I’ll explain how it works. If the evidence is buried below the ground, then they will say that your stories about the place being a temple are just legends not worth believing in. But don’t you dare dig. If it is recorded clearly in some text that a temple was destroyed, they will say the real purpose was plunder and not religious imposition. If the record says that the purpose was to crush the idol worshipers, they will ask what about some Hindus who were appointed as officers? If you can actually see the remains of the old temple at the spot, they will say it is a unique style of Indo-Islamic architecture that is part of Ganga Jamuni Tehzeeb!

So how do we defeat the propaganda? We do exactly what the Jewish people did to keep holocaust deniers away. We start collecting, documenting and preserving. We start with a museum alongside the Ram Temple in Ayodhya where the world can see the evidence that was unearthed.

And then we have to scale this up to a global network. We need museums and exhibitions and school trips to learn about Hindus and the terrible oppression they faced. We need a global day of remembrance for what the Hindu people suffered in their own land. In Germany even today, there are traveling railway coaches that go from station to station, reminding people about what happened in the holocaust. The world never forgets because the Jewish people make sure they don’t.

In India, we Hindus face twice as much of a problem. I dare say most Hindus have forgotten as well. First, we have to teach Hindus about what their ancestors faced. Then, we have to tell the world. It is a huge challenge. But a museum in Ayodhya is a good beginning.