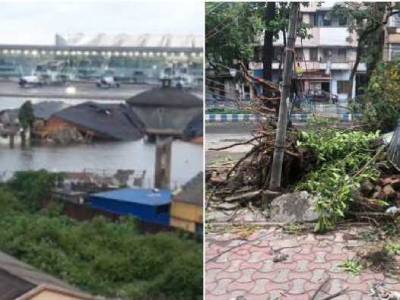 The death toll due to devastation caused by Cyclone Amphan rose to 72 across West Bengal of which 15 are from Kolkata. State Chief Minister Mamata Banerjee announced a compensation of Rs 2.5 lakhs for those affected. ” I have never seen such a disaster before. I will ask PM to visit the state and see the situation, ” she said.

The extent of the structural damage caused by Cyclone Amphan is evident from visuals of airport hangars in Kolkata collapsing and water inundating runaways. The Cyclone also left a trail of destruction (see photos here) in other parts of West Bengal and Odisha.

Weakening into a deep depression, the cyclone has now moved north-northeastwards and lay centered over Bangladesh about 300 km east-northeast of Kolkata, 110 km south-southeast of Dhubri and 80 km south-southeast of Rangpur in Bangladesh, the Indian Meteorological Department (IMD) said in its latest bulletin. It is very likely to further weaken into a depression later today and further into a well marked low thereafter, the IMD added.

The cyclone hit the states at a time when it is already struggling to fight the transmission of the novel coronavirus.

In Odisha, the Cyclone Amphan hit with a maximum wind speed of 120 km per hour due in Dhamra coast in Bhadrak district while in Paradip it was around 100 km per hour. Severe damage has occurred in the state of Odisha. Trees have been uprooted trees and bent electric poles in coastal Odisha districts of Kendrapara, Jagatsinghpur, Bhadrak and Balasore.

Hundreds of acred of farmlands are now under saline water in the northern districts of Odisha. Plantations of betel leaves, and coconut have been destroyed, causing huge losses to farmers.

The continuous winds of Cyclone Amphan’s have damaged many structures in Kolkata airport addition to the area being flooded. At least 12 people have lost lives in Bengal as winds at 120 km/hour and heavy rain caused havoc in the eastern state.

A spine chilling footage can be seen be in #Kolkata 's Kankurgachi area where the electric wires are bursting into flames. Power supply has been cut in several areas of Kolkata and #Saltlake as #Amphan continues to lash #WestBengal #CycloneAmphan pic.twitter.com/RRXVwoiWcm