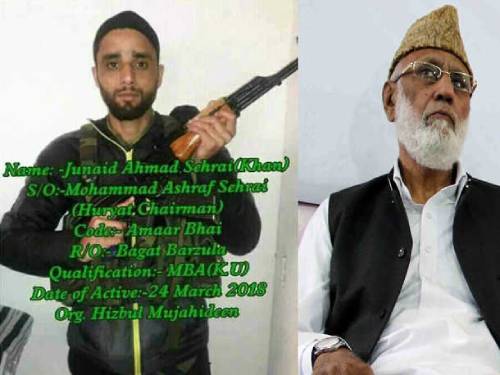 The Indian Armed Forces neutralised two Hizb-ul-Mujahideen terrorists, including the son of the Kashmiri separatist and Tehreek-e-Hurriyat chairman Mohammad Ashraf Sehrai, in an encounter in Srinagar.

The encounter broke out on the intervening night of May 18-19 in Nawakadal area in Srinagar. A Jammu and Kashmir police constable lost his life in the encounter while a CRPF jawan and two others sustained injuries.

Of the two terrorists killed in the encounter, one of them was identified as Junaid Sehrai, the son of Tehreek-e-Hurriyat chairman Mohammed Ashraf Sehrai. Junaid Sehrai was a divisional commander of Hizb-ul Mujahideen and was also responsible for several terror activities in Central Kashmir. The second terrorist was Tariq Ahmed Sheikh of Pulwama who had joined the Hizb-ul-Mujahideen terror outfit a couple of months ago in March.

Police reportedly received an intelligence tip-off about the presence of the terrorists in Nawakadal area of Srinagar. After receiving the input, the police cordoned off the area and started a combing operation. The encounter began at 2 am in the morning after the security forces zeroed in on the house where the militants were holed up. Mobile Internet and mobile call services, except on BSNL postpaid, were suspended as a part of preventive measures.

Junaid had reportedly joined the Hizb-ul-Mujahideen terror outfit in March 2018. According to his family, Junaid went to offer Friday namaz in the mosque but never returned to his home at Baghat, Srinagar.