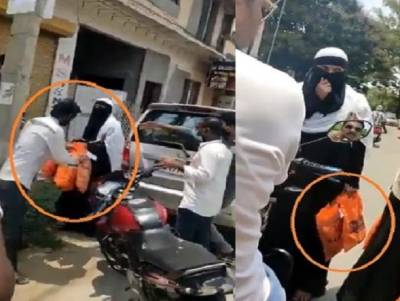 A shocking incident of jihadi goons targeting Muslim women on the streets or purchasing at Hindu shops has been reported from Davangere district of Karnataka.

A series of videos have gone viral on social media, in which jihadi mobs were seen hounding and abusing Muslim women for purchasing goods from Hindu shops. In one particular incident, a jihadi mob confronts a group of Muslim on the streets of Davangere, who had just come out a shop owned by Hindus.

Jain bakery owner was arrested for saying that no muslim staff in TN but look at here how they are hounding Muslim women for shopping from Hindu Shop and using orange cover. This is what hatred is and SECULAR INDIA is @BSYBJP @CMofKarnataka pic.twitter.com/2UFwb9Ch3n

In the horrifying video, it can be seen how Muslim mobs descended on the streets to abuse two burqa-clad women coming out BS Channabasappa and Sons, a popular cloth shop owned by Hindus in Davangere city. The mob then abuses and attacks Muslim women for buying clothes from Hindu shop at the month of Ramzan.

The mob can also be seen hounding the burqa-clad women for carrying their purchases in ‘saffron’ carry bags and then snatches the goods from them and takes out the clothes from the orange coloured plastic bags. The women can be seen pleading the aggressive Muslim mob to let them go.

A second video of the same incident shows how jihadi mob forcing the Muslim women to return the goods purchased from the Hindu store. One guy was seen snatching an orange coloured package from the burqa-clad women. The mob was also seen forcing the two-women to sit in an auto-rickshaw so they could take them to the Hindu shops and return the products they have purchased.

This is what happening now in Davangere, Karnataka. Common Muslim People are buying clothes and goon muslims are stopping them and asking them to return for some who already bought. Retweet until it reaches karnataka police. @BSYBJP @CMofKarnataka pic.twitter.com/2ORekfBMAy

Times Now has also reported about this incident.

#Breaking | 2 Muslim women targeted by men of Muslim community for buying clothes for Ramzan from a non-Muslim shop in Karnataka’s Davanagere.

Similarly, another jihadi mob, continuing similar act in another part of Davangere city, threatened two women and a child for purchasing at a store in the city. In the video, it can be seen that a man talking in Urdu bullied a burqa-clad woman and her child to not to enter the cloth shop. The incident has reportedly occurred near the clock tower of Davangere.

"Jamaats have said not to purchase from Hindu shops, yet you do this!"

Watch how a peaceful man scolds a peaceful woman for visiting a Hindu shop to buy dress materials! pic.twitter.com/EygouPoWUm

A mob speaking in Urdu can be seen threatening the women for buying clothes at the shop called ‘Malabar Cottons’ and repeatedly saying why she did visit that particular shop despite repeated warnings. A frightened child was also seen saying that they did not buy anything from the shop. OpIndia could not independently verify whether the owner of ‘Malabar Cotton’ was a Hindu, and when the incidents depicted in the videos happened. But the videos suggest that the incidents are recent and occurred during the current lockdown period as most people were wearing masks.