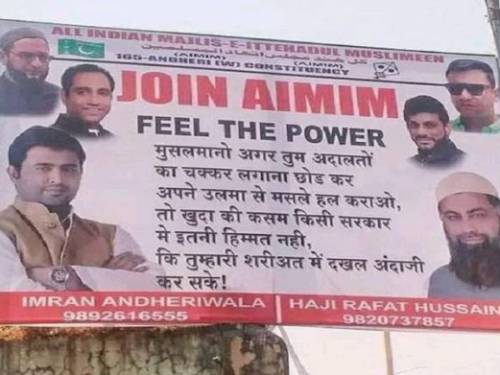 A complaint has been filed by Legal Rights Observatory (LRO) against politician Asaduddin Owaisi’s party, All India Majlis-e-Ittehad-ul-Muslimeen (AIMIM), for urging Muslims to disregard the Indian Judiciary in a viral poster.

The said complaint was filed with the Election Commission of India (ECI) and the Registrar of the Bombay High Court. In a Twitter post, LRO informed that the complaint sought for derecognition of AIMIM as a political party for ‘outrageous posters’, attempts to create a parallel judicial system and infusion of hatred against the Indian Judiciary.

On Monday, the General Secretary of BJP (Delhi), Kuljeet Singh Chahal, had tweeted the image of a banner allegedly put by my Asaduddin Owaisi’s party, AIMIM. He wrote, “AIMIM party ki asli secular chehra iss poster se pata lagta hai, aapki kya rai hai.” The loose translation of the caption goes as “The true face of AIMIM’s secularism can be found in this poster. What is your opinion about this? “

In the contentious poster, the party has urged Muslims to join them, besides encouraging them to ignore the Indian Judiciary and run a parallel Judiciary based on Islamic law. It encouraged Muslims to resolve their issues through Ulemas and not courts. The poster read, “Muslims, if you stop going to the courts and instead resolve your issues through an Ulema (Islamic cleric), then, no Government will have the courage to intervene in your Shariat.”

In a video that had earlier gone viral on social media, AIMIM supporter Abu Faisal could be seen encouraging his Muslim brethren to assault non-Muslim doctors. Warning of genocide against Hindus, he claimed that his restraint is due to the month of Ramzan. Further referring to Hindus as “swines”, “cow piss drinkers” and choicest of expletives, he threatened of destroying the saffron. Abu Faisal had also that cow’s urine ran in the body of Hindus and that they are a blot on humanity.