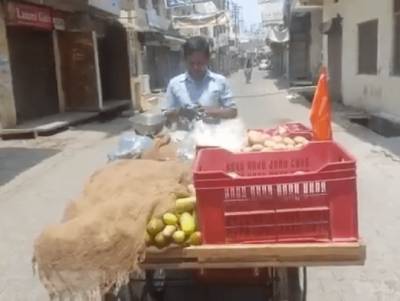 Even as the country is battling the menace of coronavirus, a surreptitious plan of harassing Hindus for displaying their religious identities is underway by online Islamists. After the Hindu fruit-sellers in Jamshedpur were browbeaten into removing the banners that sported photos of Hindus Gods, a similar case of Hindu vegetable vendor being threatened with disciplinary action has come to the fore.

An Islamist Twitter account named Tehzeeb TV shared a video of a fruit-vegetable seller ambling through Guru Nanak bazaar of Kanker Kheda area, seeking action against the fruit-seller for carrying a saffron flag on his handcart. A raft of Meerut police Twitter handles, including the IG Range Meerut, was tagged by the Islamist seeking action to be taken by Meerut Police against the poor fruit-seller.

Taking cognisance of the complaint by the Islamist Twitter handle, the IG Range Meerut responded to the video, asking Meerut Police to look into the matter.

@meerutpolice Kindly look into it

Soon after IG Range Meerut asked the Meerut Police to intervene, the official account of Meerut Police responded that they have informed the concerned station-in charge of Kankar Khera police station to take necessary action against the aforementioned complaint.

However, shortly afterwards, the Meerut Police responded on the complaint filed by the Islamist by stating that the concerned fruit-seller had the permission of selling goods online and has been asked to follow social distancing norms and lockdown restrictions.

It is pertinent to note that the complaint filed by the Islamist Tehzeeb TV was regarding the presence of a ‘saffron flag’ on the fruit-seller’s cart and not about the violation of lockdown restrictions by him as clarified by the Meerut Police.

Response by UP Police

Though the UP Police did not take action against the fruit seller for sporting the Bhagwa flag, the very fact that they acknowledged the malicious complaint by an Islamist who had wanted to harass a poor vendor for the simplest issue of displaying his faith, did not sit well with many on social media.

Many users stated that the UP police should be wary of encouraging such elements by wasting efforts and aiding them into carrying out their nefarious agenda to intimidate and harass poor Hindus.

Speaking to OpIndia, an official of the UP police stated that the social media handles are managed by a separate cell and they act as per complaints received by them.