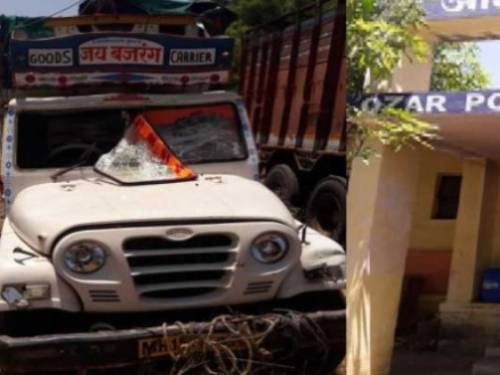 Amidst the coronavirus lockdown, a gang of five cattle smugglers namely, Naeem Farooq Quereshi (28), Shahrukh Saleem Qureshi (23) Altamas Salim Qureshi (21) Salim Suleman Quereshi (50) and Munna Bashir Syed (35) were arrested on April 26, for illegally transporting cattle in Nashik, Maharashtra. The vehicle which these cattle raiders used to consummate the crime was one with ‘Jai Bajrang Bali’ written on it.

According to a report in a local Marathi news portal, one local farmer Anil Boraste saw two cows and four calves being taken away in an inhumane manner for slaughter in the vehicle, which had a Maharashtra registration number, near Gondkar Vasti on Ojhar Sakore Mig Road in Nashik, Maharashtra on the night of April 26. The farmer immediately raised an alarm to alert the locals about the incident. As the news spread, some villagers rushed to the spot, intercepted the vehicle and rescued the bovines.

After getting the information, police inspector Bhagwan Mathure rushed to the area where the locals had intercepted the vehicle. He arrested the five men and took the bovines into his custody. Nashik police also impounded the vehicle, and seized two motorcycles worth Rs two lakh and two thousand, belonging to the criminals.

Case filed against the five accused

A case against the five accused has been registered in the Ojhar police station under IPC section 11, 11 (d) (d) of the Maharashtra Animal protection Act 1976, and for violating district collector’s curfew orders imposed amidst the Coronavirus outbreak.