In what several legal experts say is ‘gross abuse of power’, the police in Bihar’s Nalanda district have booked several people on charges of ‘outraging other community’s religious feelings’ by asking Hindu shopkeepers to install saffron flags at their shops. 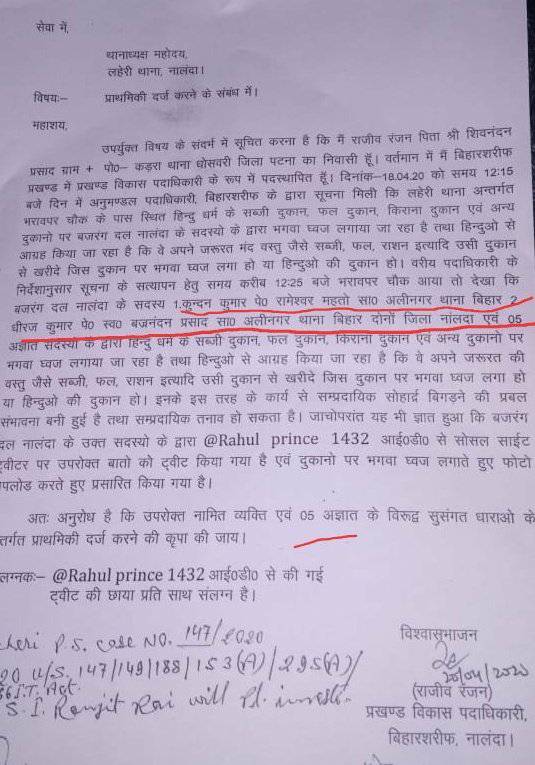 The first information report (number 147/2020) has been filed at Laheri police station in Bihar Sharif area of Nalanda. The FIR was filed on the complaint of a block development officer, named Rajeev Ranjan, of Bihar Sharif On 20 April.

Here is what Ranjan’s complaint (a copy of which is with Swarajya) says: On 18 April, around 12.15 pm, he received information from a senior official that members of Bajrang Dal were installing saffron flags at shops owned by Hindus near a chowk.

The complaint says the Bajrang Dal members were also asking Hindus to buy fruits, vegetables and groceries only from Hindu-owned shops or shops sporting saffron flags.

The complaint further says that thanks to such acts, there is a possibility that communal harmony may be disturbed and communal tension may be created.

“After investigation, it was also found that some Bajrang Dal members are posting such statements and photographs on Twitter using the ID @rahulprince1432,” concludes the complaint (as translated by Swarajya from Hindi).

Station House Officer (SHO) Ranjit Rai of Laheri police station told this correspondent over the phone that Kundan Kumar, Dheeraj Kumar and the person using the Twitter ID have been made accused, along with “four-five unidentified people”.

IPC section 147 is for rioting; 149 is for unlawful assembly guilty of offence committed in prosecution of common object; 188 is for disobedience to order duly promulgated by public servant; 153A is for promoting enmity between different groups on grounds of religion; and 295A is for deliberate and malicious acts, intended to outrage religious feelings of any class by insulting its religion or religious beliefs.

Legal voices on social media have called the charges invoked as ‘gross misuse of power’. Advocate Rakesh K Singh said that Section 295A has been wrongly imposed.

He explained his position in a series of posts on Twitter. “FIR is gross abuse. The object of Section 295-A is to punish deliberate and malicious acts intended to outrage the religious feelings of any class by insulating its religion or the religious beliefs,” he wrote in one of the posts.

You can read his posts here:

This section only punishes an aggravated form of insult to religion when it is perpetrated with deliberate and malicious intention of outraging the religious feelings of a class. 2/5

A Twitter user, who regularly posts his opinions through his account @realitycheckind, called the addition of 295A “ludicrous”.

“Well it is ludicrous — there is no other legal opinion. The state must crack down upon such police adventurism. ‘Hurting others sentiments’ must have an active offensive ingredient to it…,” he wrote.

Well it is ludicrous – there is no other legal opinion. The state must crack down upon such police adventurism.

"Hurting other sentiments" must have an active offensive ingredient to it — example : you cant open a shop with a board saying "islam/ hindu/ sucks". https://t.co/bRBEKUmFwO

Another lawyer, Nikhil Mehra, wrote on Twitter, “They are deeming the expression of Hindu identity to be incitement in and of itself. There can be no legal basis for this.”

They are deeming the expression of Hindu identity to be incitement in and if itself. There can be no legal basis for this.

When this correspondent asked SHO Ranjit Rai why he had invoked charges of insult to others’ religion and rioting when the complaint did not suggest so, Rai said, “Google and find out.”

The complainant, Rajeev Ranjan, declined to comment on the charges in the FIR. “I don’t know about all that. I filed the complaint on the directions of a senior,” he told this correspondent.

Shubham Bhardwaj, state co-convener of north Bihar for Bajrang Dal, which is a Hindu organisation affiliated to Rashtriya Swayamsewak Sangh, told this correspondent that the FIR shows Bihar police’s discriminatory attitude towards Hindus.

“There are hundreds of shops owned by Muslims that display green flags and mention ‘Muslim’ on their hoardings. The police doesn’t book them for outraging others’ feelings. Why only Hindus?” he said.

Bhardwaj also said that the members did not make any statements in the public to Hindus to buy only from Hindus. “Where is the evidence? Show us,” he said.

Bhardwaj said the organisation is in talks with lawyers in the case.

Swati Goel Sharma is a senior editor at Swarajya. She tweets at @swati_gs.