Richa Bharti, the young girl from Ranchi who was ordered by a court to distribute copies of Quran last year, has been facing harassment from Islamists and the Jharkhand state administration.

“I am afraid of staying in India. Has Jharkhand become another Pakistan? If we are harassed like this, then where should we go?”

These are the words uttered by Richa Bharti’s father in despair. The same Richa Bharti from Ranchi, who was ordered by a lower court in Ranchi to distribute copies of the Quran as a condition to secure bail in a case regarding her objectionable post on Facebook. However, Richa had refused to comply with the court order. Since then, she and her family are being continuously harassed. Richa and her family have alleged that the Jharkhand Police are doing this work at the behest of the Jharkhand government.

On Thursday (April 23, 2020), out of the blue, 5-6 policemen allegedly came to her house and seized her mobile phone. Despite repeatedly inquiring about the issue, reason or the complaint they were acting on, the Jharkhand police remained tight-lipped and did not reveal the reason why they had impounded Richa’s cellphone.

Richa Bharti’s father, Prakash Patel, humbly asked the police officials if they could furnish papers or order that authorised them to seize his daughter’s mobile phone but the police failed in showing anything. With no search warrant, the police barged into Richa Bharti’s house and started examining the mobile phones of other family members. Their private messages were also investigated. Richa’s brother’s mobile phone was also thoroughly scrutinised. When the family members questioned why they were being subjected to arbitrary investigation, the police officers remained close-mouthed about it.

The police just kept telling them that they had to take their mobile phones for inspection. This is not the first time that Richa Bharti’s family is being harassed by the police. A few weeks ago, the police came and took away Bharti’s mother’s mobile phone. Even then no reason was provided to the family. Prakash Patel kept visiting the police station to get his wife’s mobile phone back but to no avail. The police officers told him that a seizure list has been prepared. It was a Redmi A-1 handset.

On April 23, the police officers at Richa’s house were accompanied by the DSP of cybercrime, who said that they are ready to give in writing that the police are carrying their mobile phones. However, he did not reveal why were they being targeted or on whose complaint the police was acting. While talking to Opindia, Richa expressed apprehensions that a few Muslims on Twitter may have made filed complaints against her and tagged government leaders and police, after which the police suddenly started taking action against her.

Richa’s father Prakash gets emotional narrating his ordeal. He said that he and his family are being treated in such a way that they are now ashamed to live in India. He claimed that when the police confiscated the mobile phone, they scrambled towards the police station but when they reached there, they did not find anyone at the police station. Later, in the evening, a posse of 15-20 policemen again arrived at their house.

For about an hour, cybercrime officials checked all the mobile phones in the house. The family cooperated in the investigation by following the instructions given by the police. Richa’s mother is very ill. Amidst all this persistent harassment by the police, her health deteriorated further. She has been advised by her doctor to take complete bed rest. Recently, she underwent a tumour operation. In addition, she had also undergone another surgery.

During the police interrogation, her health suddenly worsened. She was quickly rushed to the hospital with the help of the police. She was treated there and later discharged when her health stabilised. Meanwhile, many fake Facebook accounts in the name of Richa Bharti have cropped up after the court order mandating Richa to distribute copies of the Quran. Her written complaint to the police station, requesting action against those fake Facebook accounts went unheeded.

A pertinent point to note here is that discussions about Richa have become a common thing among the Muslim members in the area. According to a medical store owner in the neighbourhood, a man named Shehzad made objectionable remarks against Richa and her family. When he heard the news of Richa’s house being investigated by the police, he sparked a rumour that the police had jailed them. He also said that they will all together beat up Richa and her family.

The medical store owner added that some of the Muslims in the neighbourhood were having discussions about thrashing Richa’s family. Wary of the retribution from Muslims, the family informed the police in this regard. It was only a few days ago when Richa’s family was sitting on the terrace and her cousin sister was standing near the terrace railing when 2-4 Muslim youth passing by their house beckoned towards Richa’s house and then spat on their door.

The group of Muslim men had spat on the door almost 4-5 times by the time the family members reached the entrance. As soon as the family members arrived at their gate, the youth ran away. The family says that they are constantly being instigated so that if they act in response, the other side gets a good-enough reason to create a ruckus. The family has also alleged that the local police is not cooperating with them at all. A day after the latest mobile phone seizure incident, Richa’s father, who had gone to the police station to submit an application was tormented by the station in-charge.

The police in-charge made him visit the police station thrice before refusing to take his application. In the application, the police kept pointing out trivial errors so as to discourage Richa’s father from submitting the application. Later, after a complaint was filed with the DSP, the local police officers accepted the application but made some changes to it. The application was tampered with without the consent of the complainant. This incident is from Kanke Pithoria Station area. The victim’s family has demanded intervention from Chief Minister Hemant Soren, who is still silent on this matter. Richa’s father Prakash Patel narrated the harrowing tale of his harassment by the police officers. He said that when he went to the police station to file his application, the station-in charge screamed at him, asking if he wants him to shoot everyone. Exasperated by the routine police harassment, Prakash responded back saying it would be better if the police shoot his entire family instead of shooting others. Though Richa’s mobile phone has been returned but the family is still reeling under the shock of harassment at the hands of law enforcement officials.

Citing the incident from Jamshedpur where banners of fruit-sellers with Hindu written on them were removed by the police and the news of killings of Hindus in Bengal, Richa’s father said that it doesn’t appear like they are staying in a secular country. It is as if we are living in an Islamic country, he said. The family also fears that if any fabricated evidence is found against Richa, she will be lodged in jail yet again. 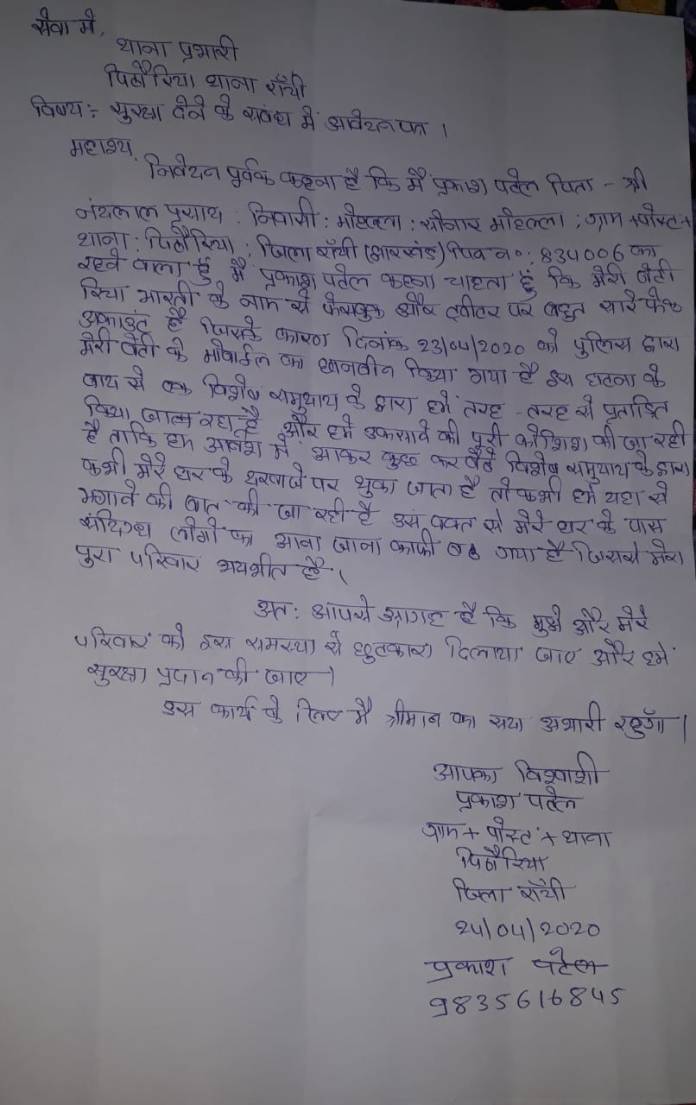 When asked why is he not outing the names of police officials who mistreated his family, Richa’s father said that he fears reprisal from the officers involved in the case for disclosing their identities in media. “When I haven’t taken their names, I am being subjected to relentless harassment, imagine, what will happen if I disclose their identities,” he said. Pithoria’s police station was also contacted by OpIndia, who denied the allegations. The police have claimed that the more the help they are extending to Richa’s family, the bigger the “drama” they are doing.

Pithoria police official said that when the health of Richa’s mother deteriorated, she was sent for treatment by the police car. The family, on the other hand, says that this was possible due to the support of DSP, who is a woman herself. Refuting the allegations of ‘fear’ raised by the family, the station in-charge defended the police saying the patrolling team passed through Richa’s house several times a day, ensuring that there is no untoward incident in the area. He also denied that the application was tampered with.

Richa Bharti has also released a video in which she alleges that on the basis of the tweets of some Muslims, the police came to her house repeatedly to check their mobile phones. Richa requested the police to take action against those who are throwing spit in various places and against those who disrespect our soldiers. She had alleged that the abuse of Hindus in the state started as soon as the government in Jharkhand changed.

When the family is repeatedly alleging that the movement of suspicious people around their house has increased and local Muslims are talking about killing them, then why is the police not taking any action or why is the government not taking steps to provide them security? On the contrary, to what extent it is correct to dismiss the allegations of someone as a ‘gimmick’? That too when the family is struggling with a host of other problems.

In July 2019, a Ranchi court had granted bail to Richa, who was arrested for allegedly hurting ‘religious sentiments’ by writing about Tabrez Ansari’s death on her Facebook account. However, while granting the bail, the court had put up a condition that she should distribute copies of the Quran to various Islamic organisations.

Bharti had refused to follow the court order saying that the order shows the duplicity of the court. Defending her Freedom of Expression, Bharti had questioned the courts that if any Muslim accused of sharing objectionable content online had ever been asked to perform a Ramayan or Durga path like she had been asked to distribute the Quran copies. She also stated that if she agrees to comply with the court order, tomorrow they might even be asked to embrace Islam too. After facing backlash, Ranchi court has cancelled its previous order.