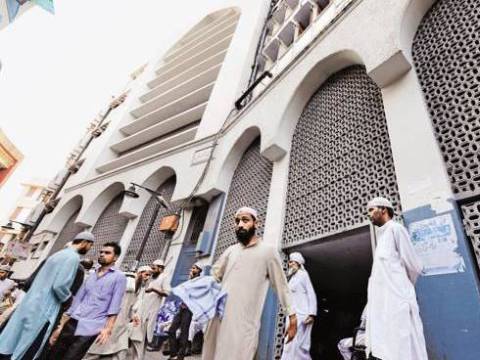 Yesterday (30 March) the Banglewali Masjid in South Delhi Nizamuddin Dargah area was sealed off, hundreds of people, showing symptoms of coronavirus infections were shifted to various hospitals in Delhi while over 2000 were put under Quarantine.

As India and the entire world grapples with the coronavirus outbreak, one Islamic organisation, the Tablighi Jamat, has not only been holding Islamic congregations of their preachers and followers, but also allowing hundreds, even thousands of Islamic believers to gather, and then to travel around the world. What is interesting is, the Tablighi Jamat held its annual Iztema amidst the coronavirus outbreak in many places. Not just in Delhi, but also in Lahore, Malaysia and many other places.

In India, 10 coronavirus deaths are now traced to Tablighi Jamat in Delhi. Since yesterday, over 285 people showing coronavirus symptoms have been admitted in Lok Nayak Hospital alone. Several dozen active cases around the nations have now been traced back to the same organisation.

The Banglewali Masjid in Delhi is Tablighi’s global headquarters. Thousands of people had gathered here in the second week of March when coronavirus fears, and the guidelines banning mass gatherings were already there. Yesterday, Tamil Nadu government told that over 1000 people had travelled to Delhi and had come back, possibly with many coronavirus positive cases, to their state. 819 people have been listed. Mant patient currently traced had travel or contact history to the Tablighi Jamat event, including several foreign nationals, Tablighi preachers from other countries.

Same is the case with Andaman and Nicobar Island, where 6 Jamat returnees had tested positive on Friday. A man from Guntur who had travelled by train, the 65-year-old man who died in Srinagar last week and many, many more. In Karimnagar, 7 Indonesians from Tabligh were found to be COVID-19 positive.

What is most alarming that the Mosque, right in the heart of India’s capital, was ‘allowed’ to hold such a large congregation in Mid-march where foreign nationals had gathered in large numbers, ironically when the nation has already been putting foreign returned Indians under a 14-day quarantine since February.

ANI’s Editor in Chief Smita Prakash has discussed how the Tablighi Jamat’s congregation was probably an open flouting of all the orders and guidelines issued by the Delhi and central government in the wake of the coronavirus outbreak.

250 foreigners attended this Tablighi conference. Let that sink in 250 ‘scholars’ got visas for a conference in Delhi held by a radical organisation weeks after the city had been rocked by Hindu-Muslim riots. Who gave all these foreigners visas to come here for ‘conference’

Tablighi Jamat preachers and followers attended the Iztema in Delhi, then took trains and buses to travel all over India. Some returned to their home towns. While many foreign nationals went to visit other Mosques, staying there, possibly passing on the disease to many others. In TN, the two Thai nationals who had attended the Jamat have both been found COVID-19 positive. 4 members of the same family who had come in contact with them are positive too. The Srinagar man, along with many students and preachers, had stopped at UP’s Deoband, another large Islamic establishment, housing hundreds of clerics and scholars.

What is unfolding in Nizamuddin now, has already happened in Malaysia. On 15 March, Malaysia reported over 190 positive cases of COVID-19. Most were from the Iztema of Tabligh Jamat that had seen over 16,000 preachers and followers from several countries. The numbers only grew, because, like in Delhi, congregation and then travelling, made the case worse.

The Tabligh group had held a mass gathering at Masjid Jamek Sri Petaling on the outskirts of Kuala Lumpur involving thousands of people leading to the spread of the deadly virus. Out of the 50 cases in Brunei at that time, 45 were Tabligh attendees.

Tablighi’s preachers spread the message of Islam. Unfortunately, as the coronavirus continued its ravaging path across nations, claiming lives and infecting more and more humans with every transmission, the (un)timely annual Iztemas of the Tablighi Jamat became the perfect vessels for the virus to spread its menace around the world.

In Pakistan, despite concerns by many national and international institutions, the Tablighi Jamat Iztema in Lahore saw a massive footfall of over 250,000 people. While a majority of attendees were Pakistani, many were foreign nationals too. The Iztema occurred between 11 and 15 March. The results were as expected. Several days later, Gaza reported the first two positive cases, both from Tablighi Jamat, freshly returned from Lahore. Now, the single event in Lahore is believed to be behind a majority of cases in Pakistan.

There are some in India who think that the Tablighi Jamat becoming the super spreader in Asia does not have to do anything with religion.

It was a meeting of the Tableeghi Jamaat: now if you think religion had anything to do with the virus spread , then god save you and people like you. I will show a spine, will you show a heart?? https://t.co/tABzB0rE5H

On the contrary, religious fundamentalism IS the primary reason that the Tablighi Jamat ignored global pandemic concerns, defied guidelines against mass-gatherings and housed thousands of people of varied nationalities to gather under single roofs. They believed that the coronavirus could not touch them.

The provincial government in Pakistan’s Punjab had called for the cancellation of the event. They dismissed coronavirus concerns, equating it with any other natural calamity. “We just focus on action, on deeds, and Allah protects,” said a Tablighi leader.

Yesterday, a Tablighi Jamat member held in quarantine in Pakistan’s Punjab made a bid to escape. He had stabbed and killed a Pakistani police officer.

SHO Ashraf Malik in Layyah stabbed & injured by a Tablighi Jamaat member who was trying to escape quarantine. 27 Tablighi Jamaat members out of 35 screened at their markaz in Raiwind have tested positive for coronavirus. Islam or not, Tablighis are certainly spreading the virus pic.twitter.com/dcFmynBaJd

After gathering in Pakistan, the Tablighi members had spread as far as Gaza, Kyrgyzstan and many other nations. Long after gatherings were banned, even on 24 March, Tablighi Jamat was reportedly holding over 1000 people inside its Mosque in Nizamuddin.

The Tablighi Jamat is so far linked to 10 coronavirus deaths in India, and dozens of positive cases. Looking at the contact transmission factor, the tendency to avoid quarantine and lack of voluntary declaration to authorities, and the fact that they had travelled from Delhi to all parts of India accompanied by foreign nationals, it can now be said that we are staring at a potential catastrophe.

Social media is flooded with videos and posts of Muslims who openly declare that they do not believe the coronavirus can do them any harm and ‘Allah will protect them’. We have seen reports on how Mosques and Maulvis in India are reluctant to close Namaz services, many even openly declaring that they will not prevent believers from coming to pray. The Tablighi Jamat is a major Muslim organisation in the world, commanding influence over millions of believers. Such an organisation actively defying orders against mass-gatherings and ignoring the threats of a pandemic only makes it worse for the average Muslims to protect their families against the virus.

The Holy Kaaba in Mecca and the Iranian authorities have already announced that they are shutting down congregational prayers in the wake of the outbreak but organisations like Tablighi Jamaat are not only defying orders but have been actively spreading the virus around the world under the garb of faith.

In the age of internet and telecommunication, lack of information can not be an excuse. The way the Tablighi Jamat has defied guidelines, even orders, and has helped spread coronavirus in Asia, will probably be a case study in the future on how religious fundamentalism helped a virus to defeat humanity.