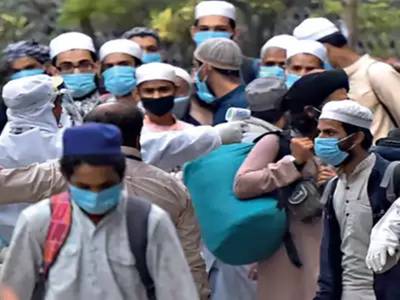 The Home Ministry on Tuesday said that the foreign Islamic preachers who visited India on tourist visa but attended the Islamic religious conference organised by the “Tablighi Jamaat” are in violation of visa rules. The preachers were found staying at the Banglewali Masjid, the Mosque near the Hazrat Nizamuddin Dargah in Delhi, earlier this month. According to reports almost 800 such Indonesian Islamic preachers, who attended the event, may now be blacklisted for flouting the visa rules.

India and Indonesia have a liberal visa arrangement and allow tourist visa on arrival for the citizens. However, as per the policy guidelines of Indian Visa issued by Government of India, preaching religious ideologies, making speeches in religious places, distribution of audio-visual display or pamphlets pertaining to religious ideologies is not allowed.

“They came here on a tourist visa but were participating in religious conferences, this is a violation of visa rules. We are going to blacklist around 800 Indonesian preachers so that in future they are not able to enter the country,” said a government official.

India to permanently blacklist 811 people frm Indonesia,Malaysia, Bangladesh,Krgyzstan who arrived b/w Feb 15 to Mar 10, attended Tabligi Jamaat congregation in Nizamuddin,misled authorities under disguise of tourist visa evn as they claim no violation after Mar 23. To be treated pic.twitter.com/6NelVTQnI1

Around 8,000 people from across the country attended a gathering earlier this month at the Alami Markaz Banglewali Masjid, the headquarters of the “Tablighi Jamaat” in Nizamuddin area of south Delhi.

Earlier this month, several hundred people from across India and abroad had attended the Islamic religious conference by the “Tableeghi Jamaat” preachers at the Banglewali Masjid, the Mosque near the Hazrat Nizamuddin Dargah. Many cases of coronavirus deaths have now been traced to the Muslim event at the Banglewali Mosque which had seen a large gathering. The Mosque is the It is the global centre for the Tablighi network and the origin of the Tablighi Jamaat, as per Wikipedia.

The Mosque reportedly regularly hosts Islamic followers and preachers from all over India and from many nations in the world. From here, preachers are sent to Mosques all over India.

The event also saw visitors from Indonesia, Malaysia, Saudi Arabia and Kyrgyzstan. On Thursday, a 65-year-old man had died of COVID-19 in Srinagar. He had also attended the same event. The man had reportedly first travelled to the Deoband seminary in UP before going back to Srinagar.

Many of the other attendees had also travelled to all over India to their respective home towns. After the event, people had reportedly left the premises in groups of 20-30 people in buses. While an Indonesian and 6 Saudi Arabian citizens were sent to their home countries, over 1200 people were still staying inside the Mosque, as per reports.

On Friday, 6 persons were tested positive for coronavirus in Andaman and Nicobar Islands. All of them had attended the religious event in Delhi and had returned via Kolkata. Other confirmed cases who had attended the event at the Banglewali Mosque include a 52-year-old man from Guntur and a man from Tamil Nadu who also died of the disease.

On 19 March, 7 Indonesian nationals who had travelled from Delhi to Karimnagar, Telangana for an Islamic event had tested positive for coronavirus. They all had travelled in the same coach. “Around 50 per cent of Wuhan Coronavirus positive cases in Telangana are linked to the meetings organised by the preachers. Around 350 people from Telangana had also attended the conference in Delhi,” said a government official.

Six people from Telangana, who attended the conference between March 13 and 15, died of the disease yesterday (March 30), according to a statement from the chief minister’s office.

Six people from Telangana who attended a religious congregation at Markaz in Nizamuddin area of New Delhi from 13-15 March succumbed after they contracted #Coronavirus. Two died in Gandhi Hospital while one each died in Apollo Hospital, Global Hospital, Nizamabad and Gadwal

On Sunday, 4 members of the same family tested positive for the coronavirus in Tamil Nadu. The 4 were reportedly contacts of the two Thai nationals who had tested positive earlier. Both Thai nationals were a part of the religious event in Delhi. As per a report in The Week, Islamic preachers had fanned out from Delhi after the event and had travelled to many states, visiting Mosques and homes of Muslims. In Tamil Nadu alone, 819 people were listed as ‘suspected cases’ after they had attended the event in Delhi.

TN government has stated that over 1000 people form Tamil Nadu alone had attended the Islamic event in Nizamuddin, Delhi.

A medical camp has been set up in the area and samples are being tested. Drones have been deployed to maintain strict vigilance over movements. As per reports, over 2000 people in the area are under quarantine.

The sheer number of gatherers at the religious event among coronavirus suspected cases is a cause of worry because not only have they travelled across Indian before the lockdown kicked in, but also the larger possibility of contact transmission all over India.