Patriotic citizens and law abiding people of this country expect that Police should take immediate stringent action against all such people, who violate Govt orders in the guise of religion ! – Editor, Hindujagruti 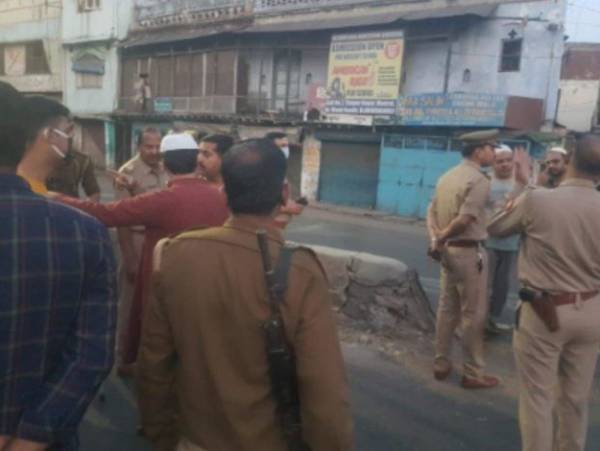 As the menace of coronavirus prompted several states across the country, including Uttar Pradesh, to impose blanket restrictions against the movement and congregation of people to blunt the spread of the virus, Muslim Namazis in Meerut were particularly incensed as they created a ruckus over being stopped from offering namaz in the mosques by the city police, says a report by Amar Ujala.

The incident reportedly pertains to Sunday, March 22, 2020, when scores of Muslims hit the streets at around 5:30 PM in Meerut following the 5-minute celebration of gratitude expressed towards doctors, policemen, Armed Forces, healthcare workers, bankers and others who were involved in discharging their duties in the wake of coronavirus outbreak. They were proceeding towards different mosques in the town- Sisiganj, Safety Tank, Rajbandh Market, Kotwali, Lisadi Gate and Nauchandin, to offer the evening prayers.

Defying the strictures barring assembly of people enforced in Meerut, the Muslim crowds came out in large numbers advancing towards the different mosques in the town. The police tried to prevent the crowds from reaching the mosques by cautioning them against the breach of curfew and requesting them to co-operate with the law enforcement officials and return to their houses. The police appealed to people against the violation of lockdown orders.

Despite repeated attempts by the police to dissuade Muslims from marching towards the mosques, many people ignored police’s appeals and continued walking towards the mosques for offering evening prayers. Instead, Muslims on road started creating ruckus after police tried to impede them from assembling at mosques in the view of the surging coronavirus cases in the country. It was only after the police started video-taping that some of the people who had come out on streets retreated.

Top officials of the police administration were alerted about the gathering of people in mosques and religious places. Senior officials including SSP reached several mosques in the city and made an appeal to the Muslim clerics in mosques to stop hosting community namaz amidst the scare of coronavirus. The SSP reportedly stated that no one was allowed to gather and pray in the mosques, claiming that the decision was taken keeping in view the safety of people. Following this incident, police personnel were deployed in mosques in many places.

SSP Ajay Sahni said that the residents of the town are expected to follow the restrictive government orders that are aimed to curb the spread of the contagion. He added that religious places are not exempted from the lockdown order and people are not allowed to congregate for any religious activities, appealing people to stay at home and refrain from venturing out in public places.