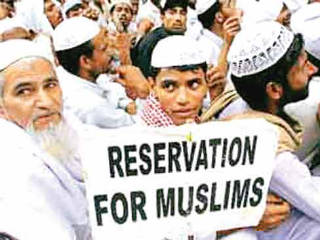 Mumbai : The three-party Maharashtra Vikas Aghadi (MVA) coalition appears to be speaking in different voices on the issue of reservation for the Muslim community in the state.

On Friday, while Minister for Minorities Nawab Malik said the state government would soon table a bill providing 5% reservation for the community, his cabinet colleague from the Shiv Sena, Eknath Shinde, said that the government had ‘not taken any such decision yet’. “I am not aware of the announcement (by Malik). No decision has been taken yet. Leaders of the MVA will together take a call on all policy decisions about giving reservation to any community. Chief Minister Uddhav Thackeray will take an appropriate decision at the appropriate time,” he said, within hours of Malik’s statement. Shinde’s stance is at variance with Malik’s statement, as the latter had given an impression in the House that the issue was a done deal.

“There are two options before us, we could go in for an ordinance like last time (in 2014) to give reservation in jobs and education, or since the High Court had cleared reservation for Muslims in education, we could first give that and then bring in an ordinance (later on) for jobs. What the High Court has cleared, we are going to do as soon as possible,” Malik had said. Malik also claimed later on that the Shiv Sena was on board with his decision.

“After I made the announcement, everyone was looking at the Shiv Sena. Let me assure you, the Sena has assured us that justice would be given to all backward classes, castes and communities,” the minister, who is from the NCP, said. Shinde’s statement has, however, created confusion about Sena’s stand.

The Shiv Sena had in the recent past indicated that it was not averse to giving reservation for the community in jobs and education.

But, it is unclear how it would react now, since rival MNS, led by Shiv Sena chief Uddhav Thackeray’s cousin Raj Thackeray, has jumped on to the Hindutva bandwagon lately. The BJP, on its part, has also queered the pitch somewhat, with opposition leader Devendra Fadnavis saying the move could impact the reservation already provided to the Maratha community and the Other Backward Classes in the state.