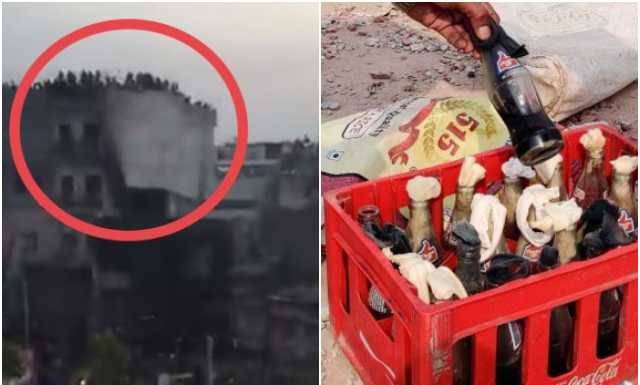 A day after murdered IB sleuth Ankit Sharma’s family alleged that their son was dragged away and lynched by AAP councillor Tahir Hussain’s goons, more videos and images have emerged which show crates of stones and petrol bombs stored at the rooftop of the AAP councillor.

SHOCKING pictures of the rooftop of AAP’s #TahirHussain. If you are innocent, did nothing, what was petrol bombs, stones, bricks doing on your terrace??

He needs to be grilled properly. While he issued a statement pleading innocence, his role should be thoroughly investigated. pic.twitter.com/eQNPOIdcNw

As per reports, councillor Tahir Hussain’s house was being used by a violent Islamist mob to pelt stones and hurl petrol bombs in the locality. Eyewitness accounts have revealed that Ankit Sharma was lynched to death by a Muslim mob. Journalist Rahul Pandita managed to get hold of multiple eyewitnesses who saw the young officer being dragged inside a house by an enraged mob before his dead body was found lying in the drain.

As per reports, not just petrol bombs and stones, sacks full of brick pieces, stones, acid packs and even catapults to hurl the stones have been seen on Hussain’s rooftop.

Crates of Petrol bombs #molotovcocktail, sacks full of stones, acid packets, catapults on the roof top of @AamAadmiParty leader #TahirHussain 's house. Proof of a planned riot? Was this the 'Headquarters'. More details on @IndiaToday & @aajtak. Top focus on #IndiaFirst at 8.25 pm pic.twitter.com/mH9YH8d246

The videos being widely shared on social media, it can be seen that Tahir Hussain’s house is clearly one of the tallest houses in the locality. A huge mob gathered on the rooftop is seen throwing petrol bombs, and pelting stones around.

IB’s Ankit Sharma, who lived in Tahir Hussain’s neighbourhood, was found brutally murdered in a nearby drain yesterday morning. Sharma’s family have been saying that a large group os Muslims, allegedly Tahir Hussain’s goons, had carried Sharma away and had beaten him up.