The Delhi Police on Saturday arrested five more accused in connection with the brutal murder of Intelligence Bureau official Ankit Sharma during the anti-Hindu riots in the national capital, reports ANI.

Delhi: Five more people have been arrested in connection with Intelligence Bureau official Ankit Sharma's murder during #Delhiviolence last month. They have been identified as Firoz, Javed, Gulfam, Shoyaib, Anas. One Salman was arrested on Thursday and is in police custody.

According to the reports, the five accused arrested by the Delhi police have been identified as Firoz, Javed, Gulfam, Shoyaib, Anas. One Salman was already in custody.

Delhi police have been in a relentless pursuit to arrest the violent rioters who ran amok, engaging in arson, stone-pelting and vandalism, injuring innumerable civilians and police personnel during the recent communal riots in Delhi.

Days after apprehending AAP leader Tahir Hussain, charged for the brutal murder of the IB sleuth Ankit Sharma, the Delhi police special cell has today arrested one 23-year-old man, identified as Haseen alias Salman, a resident of Nand Nagri, in connection with the murder of the Intelligence Bureau (IB) official, who was killed during the northeast Delhi anti-Hindu riots in Khajuri Khas. Sharma’s body was recovered from a drain near Tahir Hussain’s house on February 26, a day after he went missing.

According to an India TV report, the accused was operating with five names – Salman, Nanhe, Haseen, Momin and Mulla. The 23-year-old is currently in police custody at Lodhi colony.

One accused Salman has been apprehended in connection with the murder of Intelligence Bureau (IB) official Ankit Sharma. #DelhiViolence https://t.co/Jf9Wno6szx pic.twitter.com/avITmKSZNJ

“The arrest was made by the special cell after they received some specific information and technical evidence against Haseen, who was earlier arrested in several cases of robbery,” police sources said. Police are conducting raids to nab his four associates.

Today Delhi police revealed that the Intelligence Bureau staffer Ankit Sharma was stripped before his killing. As per a report by ABP News, his clothes were removed to check his religion before he was brutally murdered.  He had injury marks on his head, chest, and face. After his killing, an acid-like liquid was poured on Ankit Sharma to conceal his identity.

The family of the deceased Ankit Sharma had accused AAP leader Tahir Hussain and his Muslim mob of dragging their son and brutally murdering him.

A day after Sharma’s family alleged his role in the riots and his murder, many crates of petrol bombs and stones were found on the rooftop of the AAP leader. A Delhi court sent Hussain on seven-day police custody.

The Enforcement Directorate has booked suspended Aam Aadmi Party (AAP) councillor Tahir Hussain, arrested for the brutal murder of IB sleuth Ankit Sharma, for inciting riots in the Delhi, and the Radical Islamist group Popular Front of India (PFI) and some others on charges of money laundering and alleged funding of the recent anti-Hindu riots in Delhi, officials said on Wednesday.

Enforcement Directorate (ED) has also registered a case against the PFI (Popular Front of India), in connection with #DelhiViolence. https://t.co/lylyS7J8Nk

The central probe agency has also filed a criminal case under the Prevention of Money Laundering Act (PMLA) against Tahir Hussain. His alleged links with the Popular Front of India (PFI) are also being investigated.

Similar charges have also been pressed against the Popular Front of India (PFI) which is already facing a separate PMLA probe.

Aam Aadmi Party Councillor Tahir Hussain has been arrested by the Delhi Police, in connection to a murder case during the Delhi riots.

Hussain had been booked in the murder case of intelligence bureau staffer Ankit Sharma in northeast Delhi during the recent violence over the new citizenship law. He was absconding.

The Councillor had earlier filed a plea to surrender before the Magistrate.

“He is on his way to Rouse Avenue Court (Delhi) to surrender. If he reaches Court without being arrested in between then he will surrender here before the court,” said Hussain’s lawyer, Mukesh Kalia.

On Tuesday, he had moved a Delhi court for an anticipatory bail plea.

New Delhi: Preliminary investigations into the death of Intelligence Bureau (IB) staffer Ankit Sharma, who was found dead in Chand Bagh during the communal violence that swept northeast Delhi last week, have indicated, according to several reports, that his death might be a case of ‘targeted killing’ instead of him being killed in the violence.

The police, according to reports, have put together a sequence of events which eventually culminated with his death. As per this sequence, Ankit had returned from office at 5 PM on February 25 with his friends. He, along with a friend, Kalu, were standing on the side of a small bridge while stones were being pelted from the side.

The IB staffer, who, as per eyewitnesses, was at the front, tripped over a stone and fell and was then dragged away to the other side by a group of men who had arrived at the spot seeing him fall and overpowered him. The sequence states that ‘no other person was taken away by the group.’

He was then possibly taken away to a house as no one saw him after he was taken away. The police suspect that this is where he was stripped, brutalised and killed. His body was then dumped into a drain and found and taken out the next day.

A total of 54 stab wounds are reported to be in his body.

According to reports, the intelligence department, after studying the prima facie sequence of events, is convinced that ‘Ankit was killed to send across a message’ as ‘no one is killed in such a way even by a rioting mob.’

Efforts are being made to identify the suspects who dragged him away, based on their details as per the eyewitnesses.

Aam Aadmi Party (AAP) councillor Tahir Hussain has been accused of killing the IB staffer. Suspended by his party, he is currently on the run. 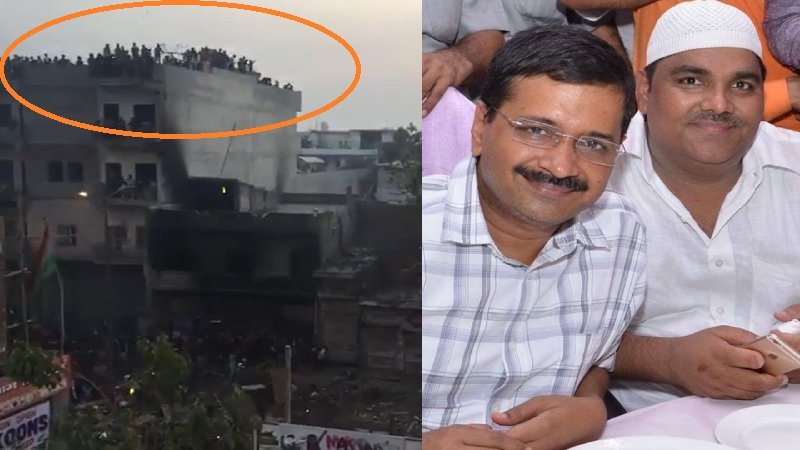 Delhi Police has registered an FIR under IPC Sections 302 (murder) and 201 (causing disappearance of evidence) against AAP councillor Tahir Hussain in connection with the killing of Intelligence Bureau staffer Ankit Sharma, whose body was pulled out of a drain in northeast Delhi Wednesday, reported by Indian Express.

The FIR, which was registered Thursday at Dayalpur police station, was based on allegations by 25-year-old Sharma’s family that Hussain was linked to the incident.

In the complaint, Ankit ‘s father Ravinder Sharma said that Hussain had assembled goons at his residence, who were firing guns and throwing petrol bombs from the rooftop.

He said, “On Tuesday, Ankit came back home but left around 5 pm to buy groceries. When he did not return, we started looking for him at different police stations and hospitals. We couldn’t find him and filed a missing report. Later, a neighbour told me that he saw Ankit with a friend. We went to his place and asked about Ankit. He told us that there were rumours that a man was beaten to death near Chand Bagh bridge and his body was dumped in a drain.”

The family informed police after which local divers were deployed to find the body. The divers pulled out a body that was identified by Ankit’s family. His father said that there were multiple stab wounds on his son’s face, head, back and chest. The family has mentioned in the FIR that it was Tahir and his goons, who Killed Ankit near the Chand Bagh bridge.

The dead body of slain Intelligence Bureau constable Ankit Sharma was recovered from a ditch in Chand Bagh. His body was then sent for autopsy by the authorities. The autopsy report has now come in and it has revealed the horrific brutality that was inflicted on him before his body was dumped in a ditch behind the house of AAP leader Tahir Hussain, reported by OpIndia.

The autopsy report says that Ankit Sharma was stabbed over 400 times, and his body has been mutilated beyond belief. He has stab wounds all over his body and not even a single portion of it was spared. He was stabbed for hours, four to six hours, by possibly as many as six individuals together. Moreover, his intestines were ripped apart, says the autopsy report. Forensic doctors have reportedly said that they haven’t seen such nightmarish mutilation in their lives. The report says that the body had “multiple abrasion.. deep cut.. by sharp edge objects”.

The panel of doctors, who carried out post mortem, has clearly stated that Ankit Sharma was brutally and repeatedly stabbed, which had caused his death. 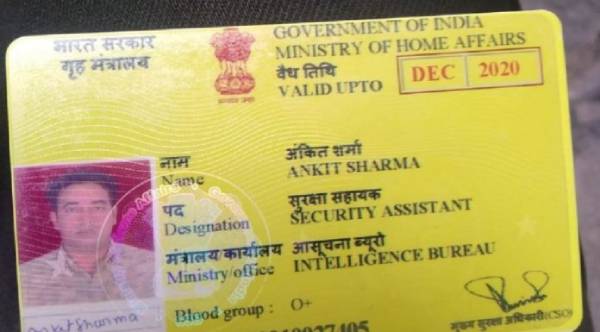 The dead body of an Intelligence Bureau Constable has been recovered from a drain in North East Delhi amidst communal riots in the national capital. The deceased constable has been identified as Ankit Sharma. His body was recovered from a drain in Chand Bagh. It is believed that he was beaten to death and later, the mob disposed of his body by dumping it in the drain.

The family of Ankit Sharma had been looking for him since Tuesday. His father, Ravinder Sharma, is also a head constable in the Intelligence Bureau. Ankit Sharma had joined the IB in 2017. As per reports, his rank was ‘security assistant’. His father has alleged that in addition to being beaten up, Ankit Sharma was also shot at. The body has been sent to GTB Hospital for a post mortem. An individual from Bihar, Deepak Kumar, has also been beaten to death by the rioters. He is originally from Salempur village in Bihar’s Bhojpur district and lived at Mandoli in Delhi.