Another example of minority appeasement for votes ! This same Govt takes away money from Hindu temples, while gives out money to mosques and churches. Hindus need to wake up and unite to change this situation ! – Editor, Hindujagruti 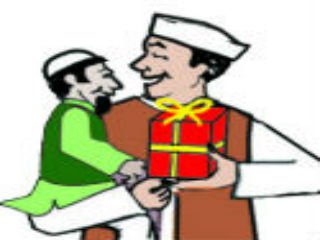 Chennai : Tamil Nadu Chief Minister Edapaddi K Palaniswami on Wednesday (19 February) made a spate of announcements directed at the welfare of minority communities in his state. Among other measures, EPS announced a subsidy of 50 per cent for ‘Ulemas’ to buy two-wheelers, double their pensions to Rs 3,000 from 1,500. Ulemas are the guardians and interpreters of religious knowledge in Islam.

Under the pension scheme implemented in the state in 1981, Pesh Imams, mothinars, Arabic teachers and mujawars who retired from Tamil Nadu Waqf Board institutions are paid pension. Those who have completed 20 years of service and reached 60 years of age are eligible for the perks.

There are over 2,800 institutes registered with the Tamil Nadu Waqf Board. CM Palaniswami announced under the scheme, the ulemas of these institutes would either get Rs 25,000 or 50 per cent subsidy on the cost of two-wheeler, whichever is lower.

EPS also said his government would build a Haj Illam or Haj House on land identified by the state Waqf Board at an estimated cost of Rs 15 crore. This will make it easier for the pilgrims to get accommodation and documentation work in order before embarking on the journey. Every year 4,000 -4,300 people embark on Haj pilgrim from Tamil Nadu via Chennai airport.

The move is being seen as a bargaining chip by the EPS government to assuage anti-Citizenship (Amendment) Act (CAA) and National Register of Citizens (NRC) protests in the state. Even at the time of EPS making the announcement, hundreds of Muslims were staging protests at Chepauk, a few kilometres away from the State Assembly against the amended citizenship law and NRC.

Urged Hon'ble Governor of Tamil Nadu to order State Government to restrain from discriminatory policies among citizens on religious basis by offering special perks to Ulemas which is a violation of Fundamental Rights guaranteed under Article 14 of the Indian Constitution. pic.twitter.com/LwVBb0UIcq

The government has raised the allocation for maintenance of mosques and churches in the state, a move the opposition said was aimed a wooing back the minorities who are upset with the AIADMK’s support for the Citizenship Amendment Act (CAA).

Deputy CM O Panneerselvam announced that the fund for annual maintenance of mosques across the state had been raised to ₹5 crore from ₹60 lakh. The government would spend ₹5 crore on repairs and maintenance of churches against the earlier allocation of ₹1 crore.

Panneerselvam also announced ₹2.50 crore towards annual administrative grant for the Wakf Board. Besides, scholarships to the tune of ₹98.66 crore would be disbursed to around 3.64 lakh students of minority communities in the current fiscal year.

The ruling AIADMK had faced an electoral rout in the Lok Sabha elections in 2019 after striking an alliance with the BJP. In the recent polls to urban local bodies, the minorities are thought to have voted against the party for backing the CAA in Parliament.

This is the last budget of this government, and it has been conciliatory to the minorities. “The budget announcement is aimed to please the minorities and convey that the AIADMK is for the welfare of the minorities. But it will not pay off,” said state chairman of the Congress minority department, J Aslam Bahsa.

“We expected a full-sleeved shirt, but it turned out to be a half-sleeved one ,” said MLA Thameem Ansari. It had become customary for the AIADMK government to make announcements of fund allocations for minority communities, but nothing materialised, he added.