New Delhi : Archaeological Survey of India has decided to spend an estimated Rs 2-5 crore to spruce up a dilapidated 17th-century monument — Sheesh Mahal in Delhi’s Shalimar Bagh — where, according to officials, the preliminary ceremony of Mughal emperor Aurangzeb’s coronation took place in 1658, reported TOI.

According to the blueprint of the plan, accessed by TOI, an old water channel between two pavilions on the premises will be revived while decorative fountains will also be set up. Red sandstone from Rajasthan and Agra will be used to replace the damaged stones in the pavilions. The move comes months after LG Anil Baijal, also the chairman of DDA, visited the monument along with officials from ASI. The ASI official confirmed that a first installment of Rs 70 lakh had already been granted for the project.

Built by Shah Jahan, the monument came under ASI protection in 1983. The restoration, which will be supervised by ASI’s Delhi mini-circle team. An ASI official said minor repair work had been carried out at intervals, but this was the first time that large-scale restoration of Sheesh Mahal would take place.

Netizens are protesting against this using #ASI_Glorifying_Aurangzeb

Why are we glorifying barbaric Aurangazeb ?

Aurangzeb was a religious bigot, very cunning, cruel and wicked towards Hindus. After killing his own brothers who were bit moderate compared to Aurangzeb and putting his father behind bars; barbaric Aurangzeb took full control of regime and continued his fanatic way of leading a life of a terrorist Muslim by forcibly converting Hindus into Islam and killing those who wanted to follow Hinduism. Aurangzeb’s rule was gory saga of loot, rape, killing and genocide of Hindus. Aurangzeb conducted brutal killings of brave Sikhs and over 4.6 Million of Hindus. In 1675, Tegh Bahadur, the ninth of the sikh gurus was taken and executed because he refused to embrace Islam.

He ordered ‘all governors of provinces to destroy with a willing hand the schools and temples of the Hindus. Inconsequence, the temple of Vishwanath at Benares and over 60,000 temples were destroyed . Till today, the old Kashi Vishvanath temple wall is visible as a part of the walls of the Gyanvapi mosque which Aurangzeb had built at the site.

Considering this barbaric history of Aurangzeb, ‘Why are we glorifying barbaric Aurangazeb, by spending taxpayers money on the renovation of Aurangzeb’s coronation place ?’ is the question arising in the minds of Hindus.

Why ASI is ignoring the rich heritage of Chhatrapati Shivaji Maharaj ? 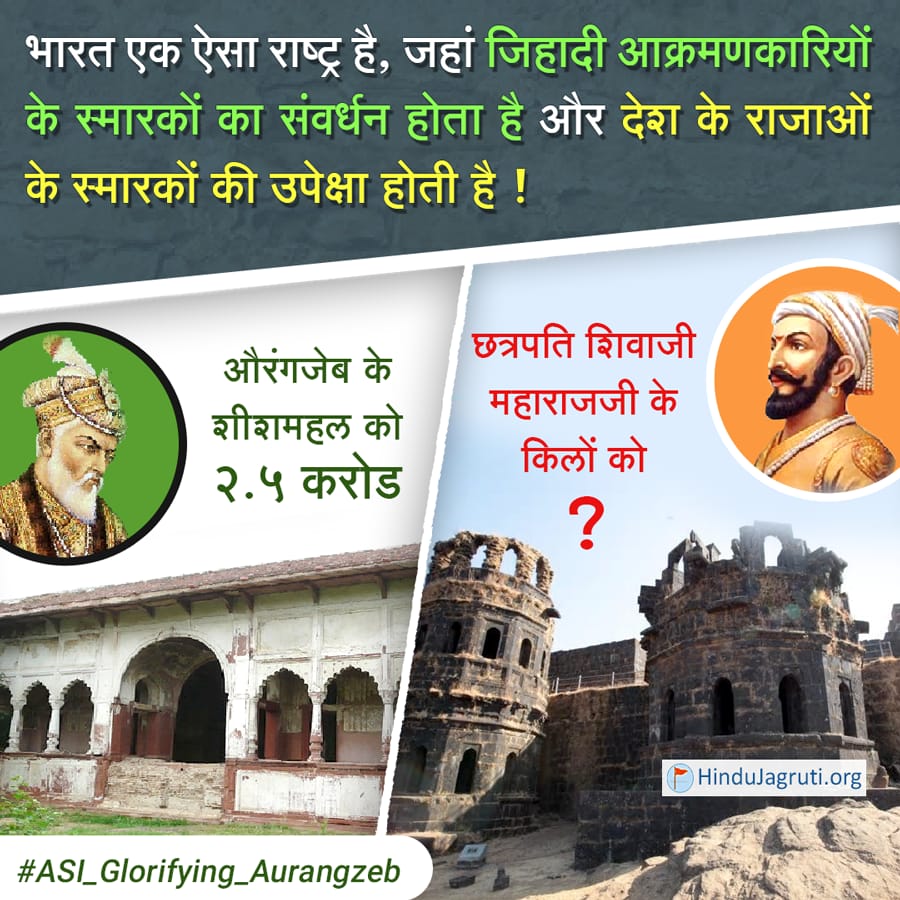 A. Forts are an integral part of Maharashtra’s history, but the security provided at many of them is hardly on a par with their significance. One major sign of this is the frequent disappearance of artefacts; the most recent case being part of Chhatrapati Shivaji’s sword vanishing from a well-known statue at Raigad on December 10, 2016, reported by India Times.

History enthusiasts are blaming the lack of security at the location for this debacle. In fact, most of the artefacts atop forts remain completely exposed and ignored. Also, there are no paperwork documenting the number and location of artefacts, which means the lax security and frequency of thefts often go unreported.  The forts already fall under the protection of the Archaeological Survey of India (ASI).

B. Officials from the Archaeological Survey of India (ASI) said that, due to extremely heavy spells of rain in 2019 portions of fortification walls and other structures at some forts have fallen, reported TOI. Portions of two structures have fallen during the heavy rains at Shivneri fort, the birthplace of Chhatrapati Shivaji Maharaj. One portion fell near the Maha Darwaza and the other right next to the enclosure where Shivaji Maharaj was born. Similarly, portions of walls or structures have fallen at other historic forts in western and central Maharashtra like Panhala fort in Kolhapur, Raigad fort and Avchitgad in the Sahyadri ranges.

Why doesn’t the ASI take up reconstruction of ruins of these Sanatan heritage ?

Ruins of Sanatan Heritage in Kashmir !!

If we don't realise this today, our children will pay the price for our negligence tomorrow

Hindus are expressing their protest via Twitter. Below are few tweets,

Sir @narendramodi are you aware that @ASIGoI under @MinOfCultureGoI is spending tax payers money to face lift coronation site of "Aurangzeb"
So many Hindu temples remain neglected by ASI but all mughal symbols are given top priority by this govt org
It's 6 yrs sir??@amitshah https://t.co/bBob125W3V

Namaste PM Modi @narendramodi ,@AmitShah
Sir one question as citizen of Hindustan & a True patriotic Hindu
Do we really need to spend Rs 2.5 CRORE on 'Aurangzeb's Coronation Site' in Delhi
Does murderer of Millions of Hindus
Deserve ths frm our money
RT this Max.#KarnatakaBandh pic.twitter.com/K2lAKPnPuT

Their are 1000s of ancient monuments in India is miserable condition of Shivaji Maharaj, Maharana Partab, Maharaja Ranjit Singh etc

&
ASI chooses to spend crores on a forgotten Aurangzeb monument?

We need to sort our priorities!

India is the only country where rapists & murderers get their memorials & gov spent thousands of Taxpayers money on that,why there is a need to rebuild this gruesome murderer grave ?? ?@BJP4India @PMOIndia @HMOIndia https://t.co/goQXJW2fSJ via @swarajyamag

#ASI_Glorifying_Aurangzeb is not new,
See the situation at #Lonar #temple, where #ASI has locked the temples, #Hindu Gods are prisoners? @HinduAmericans @HinduJagrutiOrg pic.twitter.com/VCLNC4PBPZ

The photos given are of forts of Shivaji Maharaj,has @ASIGoI weared a blindfold,can't they see the condition of the forts.

On other hand ASI is spending money on Aurangzebs Sheesh Mahal.

Aurangzeb was a Invader then why to Glorify Him..! pic.twitter.com/vls0IBcw8M