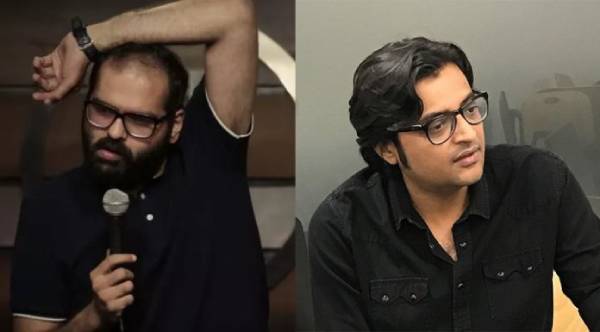 In what appears to be a massive security breach, ‘mentally unstable’ ‘comedian’ Kunal Kamra abused and heckled senior journalist Arnab Goswami on a flight from Mumbai to Lucknow. Kunal Kamra then took to Twitter to upload a partial video where he is seen heckling Arnab Goswami, who is trying to ignore Kamra behaving like a lunatic.

I did this for my hero…
I did it for Rohit pic.twitter.com/aMSdiTanHo

He also tweeted that he gave Arnab Goswami a ‘monologue’ about his journalism.

All he did was call me mentally unstable & after sometime I had no choice but to return to my seat.

He ended the tweet with ‘F*ck Arnab’ and wrote that Arnab refused to answer him and called him mentally unstable.

IndiGo bans Kunal Kamra for unruly behaviour, Union Minister asks other airlines to extend the ban on the bully. As a result of this, now Air India and Spicejet have also banned him from flying on their aircrafts.

We are left with no option but to advise other airlines to impose similar restrictions on the person concerned. https://t.co/UHKKZfdTVS

#FlyAI: In view of the incident onboard @IndiGo6E, Air India wishes to inform that conduct of Person concerned is unacceptable.With a view to discourage such behavior onboard flts, Mr Kunal Kamra is suspended from flying on any Air India flt until further notice. @HardeepSPuri .

SpiceJet has decided to suspend Mr. Kunal Kamra from flying with the airline till further notice. @MoCA_GoI @DGCAIndia @HardeepSPuri @IndiGo6E

In the video uploaded by Kamra he can be heard heckling Arnab and asking him about how he could discuss Rohit Vemula’s caste. He also tells Arnab that he should be answering him since he supports Rahul Gandhi and is a part of the ‘Tukde Tukde Gang’. The video ends with Kunal Kamra calling Arnab Goswami a ‘Nationalist’ as if trying to imply that being one is akin to abuse.

While Kamra is trying to paint this as some sort of crusade in favour of ‘journalism’ and a tribute to his hero Rohit Vemula (a student who tragically committed suicide and a trail of vultures fed off him for mileage), the truth is far from it.

In September 2017, the government of India through Ministry of Civil Aviation unveiled rules to tackle on-board disruptive and unruly behaviour by passengers which could put them on No Fly List. With Indigo barring him for flying for six months, Air India too followed suit.

This unruly behavior of Kunal Kamra was hailed by many ‘liberals’ including names such as Shashi Tharoor.

The truth is that it was time someone gave him a taste of his own medicine. These are the words he regularly uses to berate his innocent victims, except he does so in a hectoring, bullying manner & at higher volume & pitch than @kunalkamra88 does in this video. https://t.co/e94B8WcEtj

Kunal Kanra did nothing as compared to what Republic TV and its reporters do every day many times a day: heckling. Arnab Goswami is a mountain of poison. He deserves this and a lot lot more. I support Kunal here. https://t.co/riIM4ucXpK