A newly formed Shri Mahakaleshwar Bhaktagan Sangharsh Samiti has voices concern against Anti-CAA protests going on from last 4 days on Begum bagh 4-lane road as they are obstructing the road leading to famous Mahakal temple in Ujjain. The Samiti has demanded that this Anti-CAA protest on the path leading to temple should be stopped by administration. But reacting to this demand Kaji (A Muslim functionary) of the city has said that protest will go on and we won’t shift from this place. District Collector has claimed that the road access is for devotees to reach temple.

As per reports, indefinite protests are going on by Muslims at Begum bagh 4-lane road against CAA and NRC. The road is 80 feet wide and protest is going on by installing pandal on 50 feet of the road. Shri. Yogendra Bhargav of the Samiti has said that because of this protest, only 20 feet space is available for devotees’ vehicles going towards Mahakal temple. Already one road leading to temple has been closed due to construction work. Now the only road giving access to temple has been blocked by Anti-CAA protesters. Now Mahashivratri is there on 21st Feb and hence no of devotees visiting temple is going to increase. Hence the ongoing protest should be stopped from this venue.

Rakesh Mohan Tripathi, SDM of the Ujjain has said that there is enough space for access to temple for devotees. We have given permission for protest on 24 January and generally its valid for 15 days.

Now the question is that why Muslims chose only this place for their anti-CAA protest ? Did they want to block access to Mahakal temple to harass Hindu devotees ? Is there any anti-Hindu agenda in the guise of these protests ? 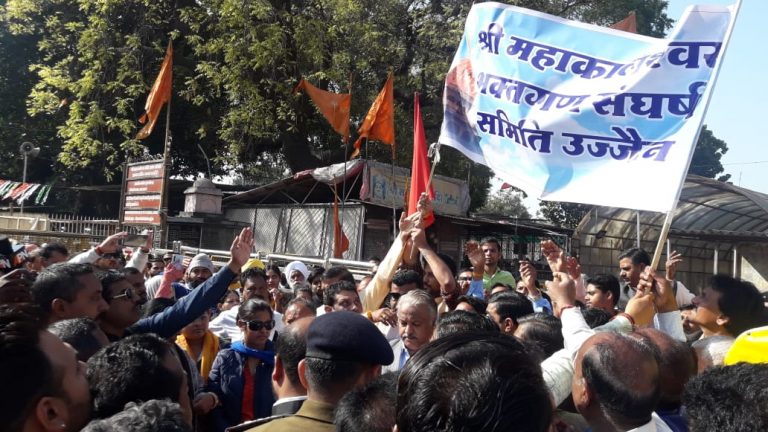