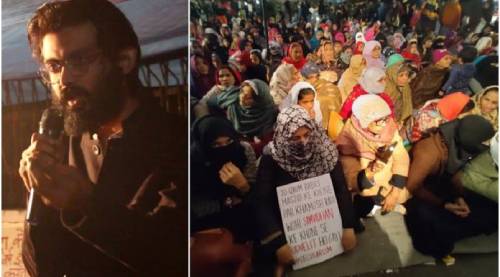 The Delhi Police has filed a supplementary charge sheet against radical Islamist Sharjeel Imam for instigating violence during the Anti-CAA protests at New Friends Colony near Jamia Millia Islamia University on December 15, 2019. He was booked under IPC Sections 124A (sedition) and 153 A (Promoting enmity between different groups) by the Delhi Police.

Sharjeel Imam was arrested for instigating & abetting Jamia riots by his seditious speech, delivered on 13th December 2019. On the basis of evidence, sections 124A and 153A of the IPC (sedition and promoting enmity between classes) were invoked in the case: Delhi Police https://t.co/bhOW1fQkcV

The charge sheet was filed at the Saket Court on 17th April for giving “seditious speech” and “abetting riots” in Jamia on December 15 last year.

“In the case of FIR no. 242/19 PS New Friends Colony, Sharjeel Imam was arrested for instigating and abetting the Jamia riots, due to his seditious speech delivered on December 13, 2019. During the investigation, on the basis of evidence collected, sections 124 A IPC and 153 A IPC (Sedition and promoting enmity) were invoked in the case. In this case, the first charge-sheet was filed against the rioters arrested by the SIT led by Shri Rajesh Deo. A Supplementary charge-sheet in continuation of the earlier charge-sheet has now been filed in the court of MM Saket court,” a statement issued by Delhi Police said.

According to police, riots broke out “in consequence to the protest march organised by Jamia students” against the CAA in December.

“The mob indulged in large scale rioting, stone-pelting and arson, and in the process destroyed many public and private properties. Cases of rioting, arson and damage to public properties were registered in both the police stations. Many policemen and public persons were injured in the riots,” the Delhi police added.

Four public buses and two police vehicles were set ablaze during the violent protests. DCP (Southeast) Chinmay Biswal had claimed that around 1500 demonstrators blocked the road and did not listen to the people who urged them to clear the road.

Eventually, the cops had to resort to lathi-charge and tear gas shells to pacify the mob. The clash left 60 people injured including students, police, and firefighters. Sharjeel Imam has been charged giving provocative speeches that ultimately culminated in the violence.

Earlier, a Court had sent Sharjeel Imamd to 14 days in judicial custody, till March 3. As per reports, the police had attached CCTV footage, call detail records and statements of over 100 witnesses as evidence in the charge sheet that was submitted before Chief Metropolitan Magistrate Gurmohina Kaur.

Sharjeel repeatedly told officers that Muslims were being treated poorly in this country and so he was raising his voice against this. He admitted that he knew he could be arrested for his speech but showed no regrets.

JNU student Sharjeel Imam has arrested by Delhi Police in sedition case. Sharjeel Imam had been booked for sedition by police of five states — Assam, Uttar Pradesh, Arunachal Pradesh, New Delhi, Manipur — for a speech he gave on January 16 at Aligarh Muslim University.

As per reports, The Arunachal Pradesh police have followed their Assam counterparts in filing a case against Sharjeel Imam, an activist protesting against the Citizenship (Amendment) Act (CAA) at Shaheen Bagh, for “spewing venom” against the northeastern States.

A series of videos have gone viral on social media in which Sharjeel Imam, the chief co-ordinator of Shaheen Bagh protest and a The Wire columnist was seen instigating Muslims of the country to break India by cutting of North-east from the rest of the country. In a video which has gone viral now, Sharjeel Imam, the mastermind Of Shaheen Bagh ‘protests’ and The Wire columnist, while speaking to Muslim mobs, says, “Our main aim is to permanently cut Assam and North-east India from rest of India”. Earlier, the Assam government had decided to file a sedition case against Sharjeel Imam for his statements.

Assam Minister Himanta Biswa Sarma: The main organizer
of Shaheen Bagh protest (in Delhi), Sarjil has said that Assam should be cut off from the rest of India. State government has taken cognizance of this seditious statement and has decided to register a case against him. pic.twitter.com/HYq6LspNmV

“The main organizer of Shaheen Bagh protest (in Delhi), Sarjil has said that Assam should be cut off from the rest of India. State govt has taken cognizance of this seditious statement and has decided to register a case against him”, said Assam minister Himanta Biswa Sarma.

After the intervention of Assam Minister Himanta Biswa Sarma, the Assam police has lodged an FIR against Sharjeel Imam.

“An FIR has been lodged against Sharjeel Imam for his speech and inter alia commission of an offence under Sections 13 (1) and 18 of the UA (P) ACT read with Section 153A, 153B, and 124A of Indian Penal Code at Guwahati Crime Branch Police Station,” said GP Singh, Additional Director General of Police, Law and Order, at a press conference in Assam.

https://t.co/KRX67sN6bV An FIR has been lodged against Sharjil Imam for his speech and inter alia commission of offence u/s 13 (1)/18 of the UA(P)ACT read with section 153 A, 153 B and 124 A IPC at Guwahati Crime Branch Police Station. @assampolice @CMOfficeAssam

What is to be noted is that Sharjeel has not only been booked under sedition laws but also the stringent UAPA by the Assam police.

In the video, Imam further says that the non-Muslim population of the country should now stand with the demands of the Muslims. Inciting Muslims by spreading fake news, Imam says that Muslims are being discriminated through the Citizenship Amendment Act and are being put into a detention camp. Shockingly, Imam continues his fear-mongering by claiming that Muslims are being killed in Bengal. “We need block Assam including the movement of Armed Forces and the supplies. Chicken Neck belongs to Muslims,” he claims.

Sharjeel Imam is the main mastermind and coordinater of the Shaheen Bagh protests against the Citizenship Amendment Act (CAA). Interestingly, earlier, ‘Jinnah Wali Azadi’ slogans were raised at Shaheen Bagh which also pointed towards the main agenda of these anti-CAA protests, specifically at Shaheen Bagh, is the second partition of India.

Recently The Republic TV on Sunday revealed the exact modus-operandi behind the so-called peaceful protests at Shaheen Bagh. In the sting, Sharjeel Imam, the chief of Shaheen Bagh Coordination Committee confessed on camera that the original plan was to organise a protest for one day to try and block major roads to attract the ‘western media’.