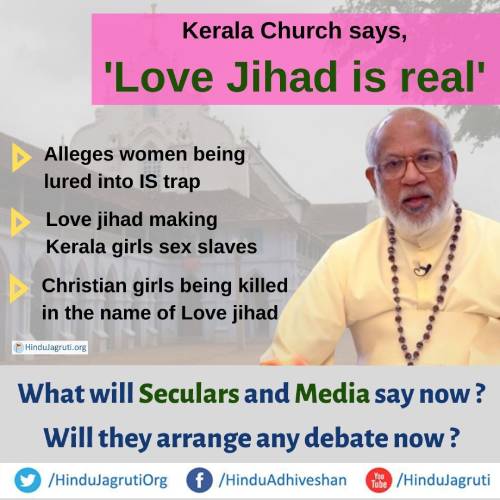 Thiruvananthapuram : The Syro-Malabar Catholic Church, which is the biggest Christian community in Kerala, on Tuesday, expressed concern over the manner in which the police are handling the issue of ‘Love Jihad’ in the state. The issue was raised during the Synod, which is the meeting of the bishops at the church.

During the get-together that ended last night, people talked about the issue and blamed the state police for not being able to implement effective measures to curb the menace of the practice and for the not doing an effective policing job.

A press release from the media wing of the Syro-Malabar Synod, read, “It’s a matter of fact that planned ‘love jihad’ is happening, targetting Christian girls. According to what police have said among the 21 who went to ISIS half of them were Christian converts. It is a serious matter that many who are not in the records are being converted and used for terrorist activities.”

The meeting further observed that the practice was preying on young Christian ladies who, according to the members in the meeting, have now become a target. They said that while it all begins in the name of love, conversion takes place once the love settles in and it eventually leads to marriage.  Reports suggest that it was also said that ‘Love Jihad’ is ‘not imaginary’ and that girls are ‘sexually abused in the name of love’.

Syro-Malabar Church: Syro-Malabar Media Commission report says Christian girls are targeted & killed in the name of 'love Jihad'. It is a matter of concern that 'love Jihad' is increasing in Kerala causing danger to the secular harmony & societal peace in Kerala.

The meeting also talked about numbers and the members said that official figures have proved that the actual situation is bad and that half of the 21 people who joined the Islamic State from Kerala in the past few years, were Christians. The members said that they wanted the police to see the issue as a law and order problem instead of treating it like a religious issue and hoped that appropriate action would be taken to curb the situation.