Hyderabad : The National Human Rights Commission (NHRC) has registered a case on the incident of attack on Hindus in Bhainsa town of Nirmal district in Telangana.

The Commission registered a case following a complaint lodged with it by a Hyderabad-based advocate K Karuna Sagar.

In a statement here on Wednesday, Karuna Sagar said that the Commission has taken the complaint on its file on February 12.

#NationalHumanRightsCommission has registered a case vide no. 244/36/23/2020 on my complaint regarding Jihadi attack on Hindus in #bhainsa town, Nirmal Dist… Waiting for action@HinduSanghatan1 pic.twitter.com/L3MFnMZQUZ

In his complaint, the advocate explained to the Commission how a targeted attack was mounted against the houses of the minority Hindus in the Bhainsa town and burned their houses.

He said the mob of about 1000 had also pelted stones on the burning houses to prevent the dwellers from coming out of the house. “With an intention to kill them by burning alive, the mob has looted and burnt belongings and also two-wheelers belonging to Hindus, the incident continued till 10 am next morning, of the incident took place on January 12,” he said.

That apart, the mob further pelted stones on policemen to prevent them from coming to the area, resulting in total damage of 18 Hindu houses and belongings including, their clothes, documents, schoolbooks, utensils, grocery, etc. There is partial damage to 40 Hindu houses, total damage of about 70 two-wheelers and auto-rickshaws.

The attack also left several policemen injured, which resulted in Hindus go without food and shelter, and subjecting the innocent Hindus under fear, agony and threat to their life and property.

He said the Hindus in the area are leaving their houses, which is a direct violation of basic fundamental rights guaranteed by the Constitution of India.

Against this backdrop, he sought the intervention of the NHRC and directed the Chief Secretary of Telangana state to take appropriate steps to compensate the Hindu victim families to repair and rebuild their damaged houses. Also, urged the State DGP to provide security to the victimized Hindu families in the Bhainsa town.

Raja Singh, BJP MLA from Goshamahal, Telangana, was placed under house arrest on Tuesday after he announced his decision to visit the Karyakartas of Hindu Vahini in Bhainsa town, where communal clashes had erupted on Sunday night. Soon after he made the announcement on Monday, a large number of policemen were deployed at his residence to prevent him from undertaking the visit.

When MIM and TRS leaders are allowed why I have been stopped @TelanganaDGP? https://t.co/f6VPgS0p8Y pic.twitter.com/wy7zRmdcxD

The BJP leader, on Tuesday, accused the Police of political partisanship and claimed that the leaders of TRS and AIMIM were permitted to visit the area but not him. “I planned to go Bhainsa on Tuesday but before I could start, a police team placed me under house arrest and posted police picket outside my house to prevent me from stepping out,” he said.

Earlier, he had accused Asaduddin Owaisi’s party of being responsible for the mob violence against Hindus where houses were set on fire and looted.

AIMIM party is behind the attack on Hindus pic.twitter.com/P9TKG1To0o 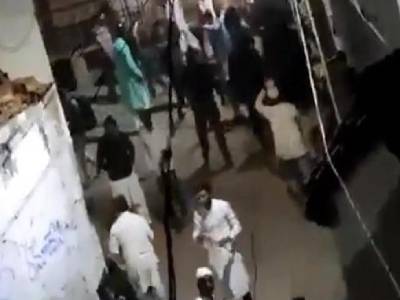 Communal tensions erupted in Telangana late on Sunday when clashes broke out between Hindus and Muslims in Bhainsa town of Nirmal district.

As per reports, 18 houses were set on fire in Korbagalli street and several bikes were torched. The Police were attacked as well when they attempted to put an end to the mob violence. Also, reportedly, the water hoses of fire tenders were cut when they tried to put out the flames.

The cause of the violence was reportedly a minor incident that escalated into a full-fledged brawl with groups from both communities resorting to stone-pelting. “It was a petty issue which led to violence. Some people of a community were making noise by removing silencers from their bike and members of other community took objection. Arguments took place between members of both communities and later it led to stone pelting before some members got indulged into arson,” a senior police officer was quoted by TOI as saying.

In a case of deliberate, largscale violence, a Muslim mob attacked members of the Hindu community and looted and burnt their property in Bhainsa town of Nirmal district, Telangana, on Sunday.https://t.co/oqVSL8VuSH

Reportedly, a group of people were creating noise on Sunday night by removing the silencer of their bikes which led to people in the neighbourhood reprimanding them. The argument that ensued soon escalated into violence. The exact reason, however, is still unknown as per reports. Allegedly, the home of a rightwing organization’s leader was targeted as well and some houses were looted.

As a consequence of the violence, the Police imposed section 144 of the CrPC in the area and internet has been temporarily suspended in the district as well. Additional policemen from neighbouring districts were deployed to bring the situation under control. The Police have assured that the guilty will be identified soon and brought to justice.