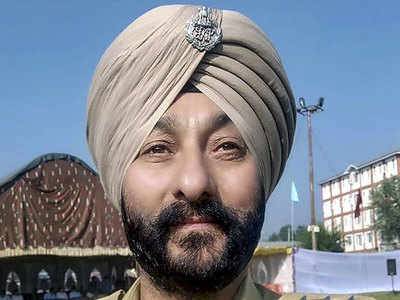 Suspended J&K Police officer Davinder Singh, who was arrested along with Hizb-ul-Mujahideen militant Naveed Mushtaq on January 11, was on the terror outfit’s payroll, according to investigators.

He had not only taken money for transporting and sheltering Naveed but had been regularly receiving money from the militant for extending assistance throughout the year, sources said.

“When he was caught, he was transporting Naveed to Jammu, where he (Naveed) was to stay for the winter. After that, they (Naveed and arrested accomplice Asif) were supposed to leave for Pakistan. We are probing the route they were to take to reach Pakistan. Davinder was negotiating between Rs 20 lakh and Rs 30 lakh for the job — he had not been paid the full amount,” a security establishment officer told The Indian Express.

According to a source, Singh is not cooperating with NIA in his interrogation. “He is refusing to even recognise numbers stored in his phone. He says he was posted at (Srinagar) airport and would save numbers of anyone who met him. He is also maintaining his innocence. Technical investigation will throw more leads on his contacts and finances,” the officer said.

The Jammu and Kashmir administration on Wednesday “forfeited” the Sher-e-Kashmir Police Medal for Gallantry awarded to Deputy Superintendent of Police Davinder Singh, who has been arrested for helping terrorists travel out of Jammu and Kashmir, an official order said.

It said the suspended officer’s act amounted to disloyalty and brought the force into disrepute. According to the order, Singh was awarded Jammu and Kashmir’s highest police award in 2018.

Police had arrested Singh, a deputy superintendent of police, at Mir Bazar in Jammu and Kashmir’s Kulgam district on Saturday, along with Hizbul Mujahideen terrorists Naveed Baba and Altaf, besides a lawyer who was operating as an overground worker for terror outfits.

“Consequent upon the arrest of Mr Davinder Singh on 11 January while trying to assist terrorist to travel outside J&K and recovery of arms and ammunition which amounts to disloyalty and conduct that has brought the force into disrepute, the Sher-e-Kashmir Police Medal for Gallantry, is hereby forfeited,” said the government order, signed by Shaleen Kabra Principal Secretary (Home).

Police had said on Tuesday that searches were carried out at Singh’s residence here, right next to the Army’s XV Corps headquarters at Badami Bagh cantonment, where he had sheltered Naveed, Altaf and a new joinee in the banned terror outfit.

Two pistols, an AK rifle and a large quantity of ammunition were seized from his residence, they had said.

Srinagar : Deputy superintendent of police Davinder Singh, who was arrested on Saturday along with two Hizb terrorists and a Hizb overground worker in Kulgam, has told his interrogators that he had received Rs 12 lakh from the terrorists to ferry them to Jammu and then Chandigarh for their onward journey to New Delhi, IG (Kashmir) Vijay Kumar told the media here on Monday. Intelligence sources said the terrorists planned to carry out attacks on Republic Day.

The DSP was suspended on Monday and is likely to be stripped of all his awards, including the President’s Police Medal for anti-militancy operations.

Davinder, who was interrogated by various intelligence agencies, including IB, military intelligence and RAW, besides the police, has disclosed that he had put up the terrorists at his Indira Nagar house in Srinagar, right next to the Army’s 15 Corps HQ, and thereafter accompanied them to Jammu in a Maruti car driven by the Hizb overground worker, intelligence sources claimed.

Meanwhile, sources said the Union home ministry may hand over the case to the NIA to find the real motive of the terrorists, Davinder’s links to terrorism and whether he had helped terrorists in the past as well.

The two Hizb terrorists arrested with Davinder are Naveed Babu alias Babar Azam, a resident of Nazneenpora in south Kashmir’s Shopian district, and his associate Rafi Ahmad Rather. The Hizb overground worker, identified as Irfan Shafi Mir, was driving the vehicle when it was intercepted by the police on Saturday. Irfan Shafi Mir has traveled to Pakistan five times on his passport.

Davinder, interestingly, was on duty ensuring security cover for the envoys of 15 countries who visited Srinagar at the Union government’s invitation last week.