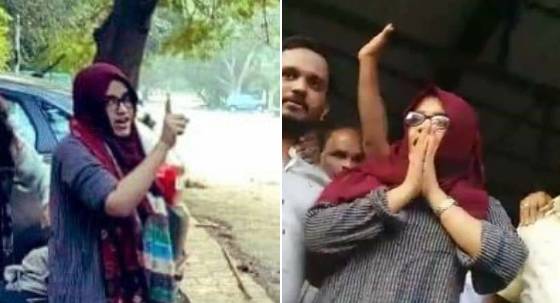 The radical Students Islamic Organisation (SIO) activist Ayesha Renna who became the heroine of Delhi’s Jamia Milia University protests against the Citizenship Amendment Act (CAA) got the taste of Freedom of Expression from the Communists (CPI(M)) at her home turf Kerala. After getting stardom through her journalist husband Afsal’s marketing techniques, two days back she landed at the Muslim dominated Malappuram in Kerala, she at a function criticised Kerala Chief Minister Pinarayi Vijayan. In her speech, she blamed the Kerala Chief Minister for jailing many students and demanded immediate release.

The incident occurred on Saturday (Dec 28) when Renna addressed a rally against CAA and NRC organised in Kondotty organised by CPM, Congress, IUML and several other Muslim groups.

Jamaat-e-Islami activist Ayesha Renna made comments against Pinarayi Vijayan at a rally. Infuriated Commies forced her to say Sorry in front of everyone

She finally gets to know what is Fascism pic.twitter.com/MyWlhJz3E2

Aysha Renna invited the wrath of communist cadres when she urged the CPM led government to release the students and others recently arrested for participating in the protests against CAA and NRC in the state. Aysha Renna launched an attack on Kerala CM Pinarayi Vijayan over the arrests of several activists of Welfare Party. The Welfare Party, which was formed in 2011, claims itself as the “voice of the voiceless”, with working committee members from Muslim community and other communities.

The furious comrades disrupted Aysha Renna’s speech, asking her to confine her personal opinions within the walls of her. The video of the heckling went viral on social media prompting criticism of the party workers of the ruling party for their anti-women attitude.

Hailed as Azadi SHero by a quarter of media, Ayesha Renna is being threatened and forced by CPI(M) workers to tender apology for criticising Kerala CM. @TOIIndiaNews @republic @AskAnshul pic.twitter.com/xTN5o4sAUM

The New Indian Express quoted Aysha Renna as saying” It is the inherent nature of some CPM members to suppress the voices of women. They would conduct programmes to empower women and, at the same time, take steps to suppress the voices of women. All of them know about it. However, as far as I understand, there are two opinions among the CPM members on my statement. Some members did not want me to apologise,” Renna said.

The incident is seen as a setback to unity of political forces in Kerala ranged against CAA. A Muslim League MLA said that the incident will affect the conduct of protest programmes against CAA.

Aysha Reena, who hails from Kerala, is currently pursuing a Masters in History from Jamia after completing her graduation from Farook college in Malappuram in 2018. She is married to Malayali Muslim journalist Afsal Rahman CA.

She was forced by CPM communist workers to beg & apologize for criticising CM Pinarayi pic.twitter.com/94VsilgKJK

Aysha Reena deactivated her Facebook account after several bigoted posts were unearthed on her timeline including her expression of support to Mumbai blasts convict Yakub Memon. Her husband Afsal Rahman posted on Facebook that remembrance of terror convicts Afzal Guru and Yakub Memon is a duty of every Muslim.

During protests in Jamia University, Ayesha Renna was loudly criticising, blaming and abusing PM Narendra Modi and Home Minister Amit Shah. Her journalist husband who is also an activist of Jihadi organisation SIO was marketing his wife by posting wife’s protests. Now she faces the anger of Communists in Kerala for criticising Kerala’s Chief Minister. Where is the Left-Liberal pseudo-secular gang and why is it not protesting at the dragging of a woman and forcing her to make public apology ?