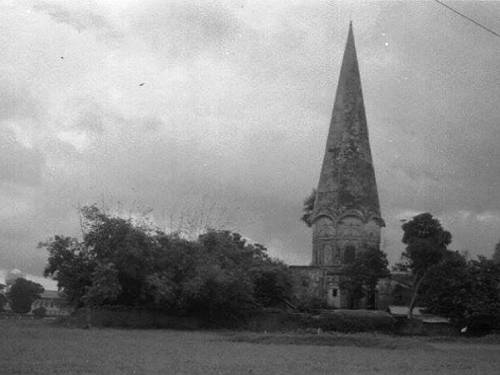 Soon after the passage of Citizenship Amendment Bill (CAB) by Lok Sabha the Bangladesh Foreign Minister A K Abdul Momen came out to criticise it by alleging that it could weaken India’s secular credentials. He also rejected the bill’s premise that minorities are being persecuted in their country.

This statement was met with widespread criticism as people pointed out the irony in Bangladesh batting for secularism, considering its state religion is Islam.

Many also shared news articles of mobs burning houses of Hindus in Bangladesh and claims of rampant minority persecution in the country.

Defence analyst Abhijit Iyer Mitra too took on Bangladesh by recounting an incident when the Sheikh Mujibur Rehman government chose to confiscate a destroyed 14th century Kali temple rather than rebuild it.

Here is the story of the ancient Ramna Kali Mandir.

It was the night of 27 March 1971 when Pakistani forces, along with their supporters encircled the temple and began firing cannons. The temple which stood the test of time for almost 600 years was blown away brick by brick by the theocratic forces.

The temple priest Sreemath Swami Paramananda Giri remained in the temple during the onslaught, tightly holding the deity in his hands. The ruthless Pakistani Army did not spare him.

In total 250 Hindu men, women and children living in the vicinity of the Kali Badi are said to have been massacred.

US Senator Gordon Allott after visiting the site in the aftermath recounts, “There are no more Hindus in Ramna Kali Bari…I went to see it. Houses were still aflame and bodies were stacked at grotesque angles”.

After the war ended in the victory of the Mukti Bahini – aided by the Indian forces, many hoped that the Sheikh Mujibur Rehman government would rebuild the temple and restore it to its former glory.

The reaction by his government was hurtful for many Hindus after the government confiscated the temple land from the Hindu board under the Enemy Property Act. It was then handed over to the PWD which then in-turn gave it to the Dhaka club.

The temple was neither rebuilt, nor was any memorial constructed in the honour of the slain Hindus.

Finally Glimmer Of Hope For The Iconic Temple

Despite the disappointment, the Hindus kept petitioning the Bangladeshi government to allow them to resume prayers at the temple land. The efforts continued for almost three decades when in 2000 the Sheikh Hasina led Awami League finally relented.

This resulted in the Hindu community erecting a makeshift pandal every year (where the temple stood) for Kali Puja and then dismantling it soon after. In 2004 a makeshift structure was created and a image of Goddess Kali installed inside.

Finally in 2006 the Khaleda Zia government announced that it will give permission for the construction of a permanent temple. A committee was formed, but there was a catch.

The Bangladesh government insisted that the temple not be built at the original site, but some distance away. A total of 2.5 acre land was released by the government for this project.

The work to construct the temple has been going on at a snails pace since then.

The project is now being funded by the Indian government includes the construction of the main temple, a five-store guesthouse, a deep tube-well and the main gate. It was recently reported that India will extend additional financial help for the construction and maintenance of the temple.

Salvation or Liberation (from the bondage of birth and death)