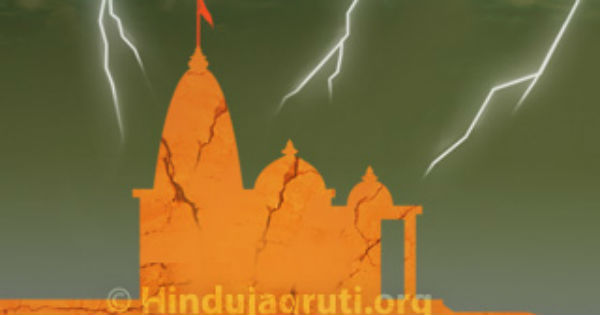 Temples are pillars of strength and source of divine energy for Hindus. Hindu Dharma has existed for thousands of years despite foreign invasions. One of the reasons for which is its temple culture.  Even with such great culture, Hindus’ temples and consequently the funds collected and other properties these temples possess, are only eyed for splurging for appeasement of non-Hindus; for filling own coffers and for pending development works. Two of its examples can be given as Rs. 60 lakhs spent by ‘Shri Saibaba Sansthan’ just for printing invitation cards for various festivals celebrated by this shrine and the other example is employees and officers of Shri TuljaBhavani Temple Shrine taking away  ornaments on Goddess’s idol, valuable gems, stones, things made in silver, 71 ancient coins etc. A report on this looting has been submitted to the District Collector and State Legislative Council by inquiry committee set up for looking into the matter. There is inordinate delay in submission of this report as these incidents took place during 1980-1981. Inquiry committee was set up after lodging several complaints and raising voice against the issue through different media. The last Government has initiated CID inquiry in this case but no report has yet been submitted nor has any action been taken. It may be noted that both the examples given above are of the temples taken over by the Government !

Using prudence for use of funds !

Is it really necessary to spend Rs. 60 lakhs for printing invitation cards in one year? A true Sai-devotee doesn’t need invitation for attending Sai-festival. In materialistic world, one has to extend invitations for functions like marriage, thread ceremony, ‘vaastu-shanti’ etc to own relatives because they want respect in worldly life; they feel insulted if invitation is not sent to them and then they don’t attend such functions out of spite. Similar is not the case of religious festivals or festivals related to Saints since devotees don’t need invitation for attending such festivals because of the inseparable relation between them and Saints-God.   There are millions of temples all over India where devotees attend such annual functions in large number without any invitation. It is therefore, necessary to think rationally about the money to be spent on invitation cards though they may be required for giving to few generous eminent personalities, Shankaracharya, Chief Minister and Prime Minister etc. When we print wedding cards for a family member’s wedding, we think about our financial position; expenses involved and where we can save our own money. Fund collected at temples is the money offered by devotees with lot of devotion and faith. Such money needs to be spent on performing daily rituals in temple, offering ‘Naivedya’ etc and for imparting ‘Dharmashikshan’ to people; therefore, splurging it on something as done by Shri Saibaba Sansthan is a sin. Those misusing fund of God, Saint, incarnation or Shri Saibaba draw wrath of God/Saints. Though it is not seen, it is experienced later. This principle under ‘Dharma-shaastra’ is however, not known to trustees of temples taken over by the Government since they lack ‘Dharma-shikshan’ and have no training on moral values; as such they keep on misusing temple funds excessively and such funds are used even to fill their own coffers so also coffers of their relatives and friends.

Only devotees should be appointed as trustees !

If we consider only Shri Saibaba shrine, it had spent Rs. 93 lakhs for providing various facilities during the then President’s tour in the year 2008, spent Rs. 60 crores on Shirdi airport and has unnecessarily spent Rs. 112/- crores for ‘Bhakta-Niwas’ at Shrirampur.  This shrine purchased things required by Police Department during ‘Kumbh-Mela’ of 2015 worth Rs. 66, 55, 997/- at higher rates. The shrine had even lent Rs. 500 crores, interest-free, for Nilwande project in Nagar District; but the Court has imposed stay on the same. Trustees of this shrine have also taken few wrong decisions and have started wrong practices. Similar malpractices and misappropriation, misuse of funds is taking place not only at Shirdi shrine in Maharashtra but in several temples taken over by Governments all over India like in Karnataka, Andhra Pradesh, Odisha etc. Temple funds are also distributed to madarasas and mosques. Devotees don’t offer money for its misuse or misappropriation; therefore, they should get information, in lawful manner, on how their donations are being used by temples. Today, devotees should demand handing over temple management by Governments back to devotees for proper utilization of temple funds. They should also insist for appointment of only devotees on temples’ Trusts !