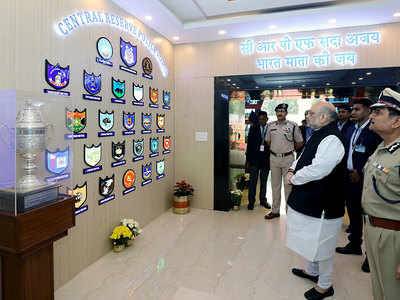 NEW DELHI: Union home minister Amit Shah directed the CRPF to undertake “effective and decisive action” against urban Naxalites as well as terrorists operating in Jammu and Kashmir as he made his maiden visit to the headquarters of the paramilitary force here on Friday, officials said.

He reviewed the overall preparedness and deployment of the over three-lakh-strong force during the more-than-two-hour-long meeting at the CGO Complex on Lodhi Road, they said.

Shah directed the force “to carry out an effective and decisive campaign against Left-Wing Extremism (LWE) operatives in the next six months”, they said.

He also asked the force to take action “against urban Naxalites and their facilitators”, they said.

While discussing the security scenario in the newly created Union Territory of Jammu-Kashmir, Shah asked the CRPF to undertake civic action programmes besides organising sports and tours for locals and youngsters.

CRPF should also reach out to the villagers and assist them in obtaining the benefits of the many central schemes which they are eligible for, the officials said.

The minister directed the force to ensure “proper winter provisioning” for the troops and that their welfare should be looked after.

The force, post the abrogation of the special status of the erstwhile state of Jammu and Kashmir under Article 370, has sent in additional troops and has over 1 lakh personnel in the Valley at present.

Officials said the requirement of infrastructure and equipment was also discussed during the meeting and a presentation was made by senior CRPF officers including Director General R R Bhatnagar.

While reviewing the Left-Wing Extremism (LWE) theatre, they said, the minister talked about improving infrastructure of the force camps and measures against improvised explosive devices.

Shah emphasised that road connectivity and medical infrastructure in LWE areas should be upgraded.
Subject of welfare of the troops was also part of the discussions and the minister directed that the health of the jawans and their families should be looked after well.

He asked the force to ensure that jawans and their families have digital health-cards and that there should be periodical health checks for their families.

The minister directed that senior officers should visit the families of personnel who were killed in the line of duty and spend time with them understanding their requirements, they said.

A database should also be made of the martyrs families and their basic issues and grievances should be systematically addressed, Shah told the CRPF officials.

The minister expressed concern about the hard and long deployment of jawans in difficult theatres and discussed various measures for giving them relief and an opportunity to stay with their families.

Shah, the officials said, directed that the building and residential infrastructure of the force should be improved and more houses at different duty locations of CRPF should be constructed.

Cutting-edge technologies and state-of-the-art equipment should be identified which are required for operational purposes along with promoting the ‘Make in India’ initiative.

He asked that the force should use Khadi and indigenously made products, they said.

The minister also posted some photographs of the visit on his official Twitter handle and said the country is proud of the “exemplary valour” of the paramilitary force’s personnel.

The Central Reserve Police Force is designated as the lead force for internal security duties and anti-naxal operations.

“CRPF personnel have always lived up to their motto of ‘sewa’ and ‘nishtha’ (service and dedication) by protecting our nation (while posted) at different terrains. I salute the courage and bravery of CRPF personnel and their families,” Shah said in a tweet.

During the initial part of the visit, Shah paid tributes to the force personnel killed in the line of duty and put a garland around an urn containing the soil from the ‘Sardar Post’ in Gujarat’s Rann of Kutch. The urn is kept at the headquarter’s entrance.

In 1965, the force was tasked to secure the post in the wake of aggressive posturing by Pakistan.

On the intervening night of April 8 and 9 that year, 3,500 men of Pakistan’s 51st Infantry Brigade, comprising the 18 Punjab Battalion, the 8 Frontier Rifles and the 6 Baluch Battalion, stealthily launched simultaneous assaults on the Sardar and Tak posts under an operation code-named “Desert Hawk”.

The retaliation by the CRPF saw the numerically and armament superior Pakistan army retreating and leaving behind 34 bodies of their soldiers, including those of two officers.

Shah said the young generation should be made aware about this story of valour. The country will be “forever indebted” to the troops who made the supreme sacrifice, the minister said.

This was the first time Shah, who became home minister in the Modi government’s second term, visited the head office of the country’s largest paramilitary force.

Shah was also accorded the guard of honour on arrival.