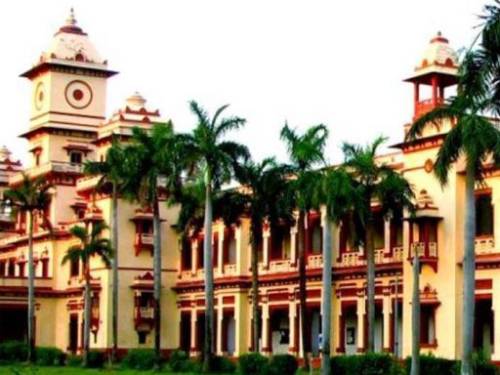 Banaras Hindu University has been lately embroiled in various controversies, with one being over the appointment of a Muslim professor in the Sanskrit department. For the last week, students of the Sanskrit literature department at Banaras Hindu University (BHU) have been protesting against the appointment of a Muslim assistant professor.

The professor, one Firoze Khan, has been appointed in the literature department of the faculty of Sanskrit Vidya Dharm Vigyan (SVDV) of the BHU.

On November 8, a large group of students staged a sit-in protest outside the vice chancellor’s house to demand that the decision to appoint Firoz Khan as an assistant professor in the department be revoked.

Meanwhile, the administration has been adamant on its decision to appoint the professor saying that it has appointed the ‘most qualified candidate’ for the position. The university maintains that they had selected candidates after a transparent process and the appointments are unanimously decided.

According to sources no classes are being held in the department since Dr Firoz Khan’s appointment on November 6. Fearing protests from the students, Khan too has not yet visited the faculty premises since his appointment.

“It is written on the plaque that the entry of non-Aryans is prohibited in the department. The plaque was installed by BHU founder Madan Mohan Malaviya Ji in 1916 when the university was established. The entry of Sikhs, Jains and Buddhists is allowed, but other non-Hindus are prohibited from entering the department,” said Shubham Kumar Tiwary, a PhD student at the Sahitya department of the faculty echoing the mind of many protesting students who believe that appointing a Muslim would be against the values of Madan Mohan Malaviya, the founder of BHU. Some also believed that corruption and bribery were involved in hiring Khan.

The students, who have been protesting the appointment, met Vice-Chancellor Rakesh Bhatnagar and the Head of Department Umakant Chaturvedi on Thursday and demanded the immediate cancellation of Khan’s appointment. However, the VC and the head of the department, in the meeting which lasted over 3 hours, made it clear that management is not willing to rescind the professor’s appointment.

“We have been told that the matter will be discussed with a legal expert in the future. We will continue our protest till he (Khan) is removed,” Tiwary said.

On the other hand, Professor Chaturvedi said that Khan was appointed by due process. “What is written on the plaque can’t be followed because the university comes under the UGC and we have to follow the rules and guidelines of the UGC,” the professor said.

This controversy had not yet simmered down when an additional controversy erupted in the University on Thursday after students of Birla and Lal Bahadur Shastri hostel in BHU got into an ugly brawl over an old dispute. Police had to intervene and resort to lathi-charge to calm down the situation which went out of control with students pelting stones and assaulting each other.

After the police intervention, students have now sat on a dharna (sit-in-protest) demanding legal action against the policemen. Several students who thronged to the campus and blocked the main gate of the university demanded that police forces, which have been heavily deployed in the university premises to maintain law and order, be sent back immediately. The students also demanded that the vice-chancellor and the chief proctor should resign taking moral responsibility of the lathi-charge and assault on students at the hands of the police.

In what transpired, two groups of students had got into an argument over something at the Birla hostel intersection on Thursday morning. This dispute turned ugly after the students went back to their hostels. Students of the LBS hostel allegedly threw stones and petrol bombs from their roof at students of the Birla hostel.

After receiving the information the police had reached the premises and searched the hostel rooms. Police recovered several stones and a pistol from LBS hostel’s terrace. They also detained 15 students who did not belong to BHU and were allegedly there to fan tensions.

While SP City Dinesh Singh said that students are being questioned and security has been tightened in the camps, the chief proctor said that action would be taken against those found guilty.