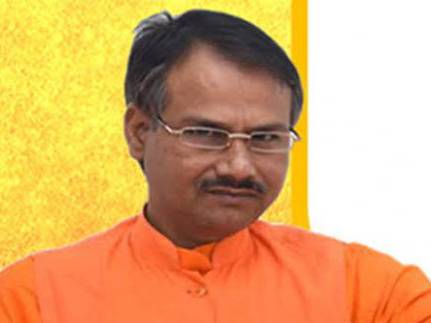 On 18th October 2019, unknown assailants had brutally stabbed and killed former Hindu Mahasabha leader Kamlesh Tiwari who had earlier spent 9 months in jail over his comments on Prophet Muhammad. It was reported that the police is also probing the possible ISIS angle to his murder as he was in their radar.

How, as per media reports, the three suspects were brought to Ahmedabad. Aaj Tak has stated that the three persons arrested are named Shamim Rashid Pathan, Faizan Pathan and Mohsin Sheikh, Sheikh is a Maulvi by profession.

News has now emerged that the persons arrested have admitted that they killed Kamlesh Tiwari over his remarks against Prophet Muhammad.

#KamleshTiwari murder case: Three persons arrested by Gujarat ATS in Surat confess that they killed Tiwari over his remark on Prophet Muhammad.

There are also details emerging that the plan to kill Kamlesh Tiwari was being hatched for 2 months and Rashid Pathan had come from Dubai for this task.

Details till now from Gujrat ATS: Maulana Mohsin, Mohammed Faisal and Rashid Pathan arrested in the conspiracy of #KamleshTiwariMurder. Rashid came from Dubai for this task. Plot was being hatched for two months.

OpIndia spoke to highly placed sources in the Uttar Pradesh Home Ministry who has confirmed that the investigation is moving at a fast pace and the SIT formed by the UP government has almost reached a conclusion of the investigation.

Refusing to comment further on the specifics of the case, the official said that by evening today, the SIT and the UP police should have concrete updates for the people. The official also said that they are close to cracking the motive behind the murder, however, they are not inclined to giving specifics out until and unless all details have been confirmed.

Yesterday, the wife of Kamlesh Tiwari had filed a complaint with the police and the police, in turn, had filed an FIR against 3 persons, including Maulana Haq for conspiring to commit murder.

Kamlesh Tiwari was arrested by the then Akhilesh Yadav government for his remarks against Prophet Mohammad’s sexuality in 2015. Muslim groups in Deoband, Saharanpur and West Bengal had launched massive riots and protests demanding Tiwari’s death.

Kamlesh Tiwari had remained in jail or over a year after the National Security Act was slapped on him. In September 2016, the Allahabad HC had finally quashed the NSA charges against him and he was released later. The arrest and subsequent charges on Kamlesh Tiwari over remarks against Prophet Muhammad had caused an outrage in the nation, especially among Hindu groups.

In Kaliachak, Malda, West Bengal, Muslims had engaged in rampant violence and riots while ‘protesting’ against Tiwari’s remarks. Over 2.5 lakh Muslims had gathered in Kaliachak and had looted shops, burnt buses and had set fire to a police station to express their anger over Tiwari’s remarks. Tiwari had stated that Prophet Mohammad was the first homosexual in the world.