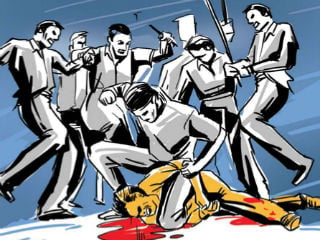 A man named Vikas Yadav was brutally assaulted by a raft of angry Muslim men in Bindki town of Fatehpur district in Uttar Pradesh following a brawl at a wheat flour mill. A video of the incident that had gone viral now, Vikas was tied up to tree by a frenzied mob of irate Jihadi men baying for his blood.

His name is Vikas Yadav, he was tied to a tree & brutally beaten by a Muslim mob.

He wasn’t caught steeling, his only fault was that he dared to argue with Shami Ahmed.

According to the reports, Vikas had come to collect wheat flour in the Bajeria neighbourhood of the town. Subsequently, he got embroiled in a scuffle with the flour mill owner Shafi Ahmed who accused Vikas of robbery. The ensuing brawl resulted in minor injuries to Vikas while Shafi sustained some injuries on his head. Following this, Shafi summoned a crowd of impassioned Muslims who tied Vikas to a tree and thrashed him mercilessly for more than 20 minutes before the police intervened.

After rescuing Vikas, he was rushed to a local hospital. However, due to the serious nature of injuries sustained by Vikas, his family members decided to shift him to a private hospital in the nearby city of Kanpur. But here too, his admission to the hospital faced resistance as the flour mill owner Shafi Ahmed too was admitted in the same hospital. The relatives of Ahmed were trying to obstruct admission of Vikas in the hospital. Only after police intervention, Vikas could be admitted in the hospital.

A mob of aggrieved people swarmed around Vikas’ house in the village after rumour of his death started doing the rounds. The mob left only after the relatives assured them that Vikas has not died and is being treated at a hospital in Kanpur.

Since then, the situation in the village is tense. Three people have been arrested by police, two days after a mob tied a man to a tree and beat him savagely. The police made arrests on Wednesday night after filing an FIR in the case. The Superintendent of police, Fatehpur, Ramesh said that others involved in the incident were being identified and more arrests would follow soon.

According to locals, Vikas initiated the brawl and he assaulted the owner first, following which the flour mill owner Shafi Ahmed shouted and got men to attack Vikas.

The FIR was filed by Vikas’s brother Dhirendra Yadav on Wednesday night which mentioned names of six people and 10 unidentified people. The police have so far arrested Mohammad Ashraf, Mohammad Irfan and Mohammad Javed. Police lookout for others is underway.