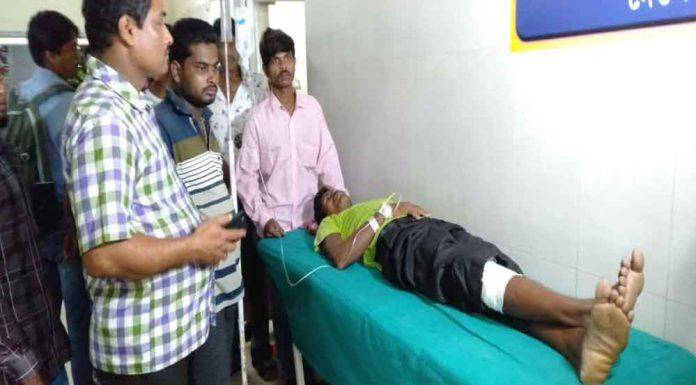 In yet another incident of political violence in West Bengal, a BJP worker was injured after he was shot allegedly by TMC workers. Ramprasad Mondal, a member of Bharatiya Janata Party, was allegedly shot at by a local TMC worker at Baruipur at South 24 Parganas in West Bengal for chanting Jai Shri Ram.

South 24 Parganas: Ramprasad Mondal,a BJP worker was injured after he was allegedly shot at by TMC workers yesterday in Baruipur .The injured has been admitted to hospital. #WestBengal pic.twitter.com/xxbVmqkowF

Mondal was shot outside his house on Thursday when a group of goons opened fire on him without any provocation. He was hit by bullets on his right leg. The incident happened at around 4 PM on Thursday. A seriously injured Mondal was taken to the Baruipur, but he was later shifted to Kolkata National Medical College for further treatment.

Nirmal also said that funding for Durga Puja could be another reason for the attack. He informed that ahead of Durga Puja, local Trinamool members had come to the poultry farm run by him for Puja chanda, and had demanded Rs 800. He had refused to pay such a high amount, and this had led to a verbal spat. He alleged that his brother was shot by TMC members Pabitra Singh, Sanyasi Naskar, Ghute Sardar and Bhaben Mondal, the same persons who had demanded Durga Puja chanda. These persons have been named in the FIR filed in connection with the case.

Victim Ramprasad Mondal said that TMC workers were unhappy over the fact that both the brothers were BJP members. He confirmed that they were attacked earlier also for chanting Jai Shri Ram.

BJP District President Sunip Das blamed TMC workers for the attack. He said, “TMC supporters have been attacking BJP party workers here and vandalising our offices. Some people had left the place due to this reason. They had returned before the Durga puja to spend time with their families but suddenly tonight a few of TMC members turned up and attacked his home with pistols.”

Das said that TMC has been threatened by the rise of BJP of the state, and they are attacking BJP workers in West Bengal. Baruipur Panchayat member Manoranjan Sardar alleged that 5-7 Trinamool members were involved in the attack.

Baruipur block TMC worker Shyamsundar Chakraborty has denied the involvement of the party in the attack. He said that Ramprasad was shot while repairing a gun. He alleged that BJP is spreading false propaganda to create disharmony in the area.

Police have registered a case and have started investigating the incident.