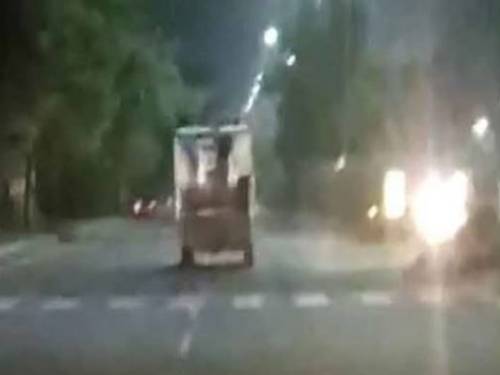 A shocking incident is being reported from Delhi NCR region where a Bajrang Dal member was shot at by cattle smugglers. In the wee hours of Thursday, an alert group of Gau Rakshaks reportedly gave a high-speed chase to 6 cow smugglers who were trying to escape along with smuggled bovines from Sector 10 of Gurugram towards Mewat.

shocking incident in Gurugram where Bajrang Dal member was shot by cattle smugglers,incident took place in Sector10a team of Gau rakshak was involved in a high-speed chase with the cow smugglers.The victim has been shifted to the hospital & NO smuggler arrested yet ⁦@ndtv⁩ pic.twitter.com/O3Pr4bVVoJ

A video of the incident showing cow smugglers desperately speeding away, breaking past multiple police barricades has emerged on social media. Reportedly, members of a Gau Rakshak group got a tip-off some smugglers in a Mahindra pickup van had come to Gurugram from Mewat on Wednesday afternoon and were planning to smuggle cows to Mewat later in the day. When the Gau Rakshaks discovered that cows were indeed being smuggled, they promptly informed the police and chased the smugglers in an attempt to nab them.

However, realising that they are being chased, the smugglers first started throwing cows off the speeding vehicle but the Gau Rakshaks relentlessly continued chasing them. At last, the smugglers fired bullets at the Gaurakshaks, injuring one of them.

DCP (crime), Gurugram Rajiv Deshwal on cow vigilante shot: At last they fired bullets which hit a member of a cow vigilante org. He was immediately admitted to a hospital. 5 of the 6 smugglers identified. Vehicle of smugglers has been recovered, search for smugglers is underway. https://t.co/92jlzaPdky

The injured Gau Rakshak, identified as Mohit (25), was immediately rushed off to Medanta hospital. According to DCP Gurugram Rajiv Deshwal, the police has identified 5 of the 6 smugglers and recovered the vehicle used by the smugglers. However, the smugglers are absconding and the police have launched a search operation for them.

The police have stated that they had informed Mewat police immediately and the pickup has been recovered by Nuh police earlier today.

It is notable here that the Mewat region in Haryana and Rajasthan has been constantly witnessing incidence of violence and even attacks at police personnel perpetrated by cattle smugglers. Just days ago, a group of cattle smugglers had fired at police in an attempt to escape the police barricade in Bharatpur.