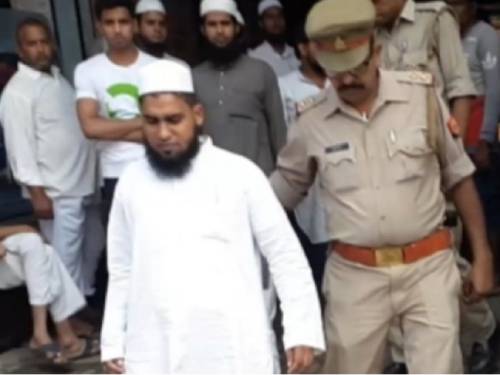 A woman head constable posted in Baghpat, UP has lodged a complaint against a maulvi (Muslim cleric) for raping her several times over the course of 15 months, under the pretext of removing ‘djinn (evil spirit)’ which the accused claimed was causing turbulence in her life.

The constable’s husband, also in the police force, had passed away several years ago after which she was appointed as a constable. Last year, her son was seriously injured in a road accident and was treated for a long time in a hospital in Meerut.

Desperate for improvement in her son’s condition, the woman went to meet the accused maulvi in a masjid on 3 July, 2018. He called her later that night and after doing jhaad-phoonk (exorcism) on her, he claimed that there was an evil spirit (djinn) over her entire family and if she did not get ‘treatment’ her son would die.

Later, the maulvi raped the head constable several times till September, 2019 during the course of this ‘treatment’. He also blackmailed her and extorted several lakh rupees. Later, he pressurized her along with several prominent people to settle the matter.

As per instructions of SP Pratap Gopendra Yadav, a case has been lodged against Maulana Zubair (s/o Farukh) from Momin Masjid, Baghpat. Attempts are being made to arrest him.

The phenomenon of maulvis and fakirs (Muslim ascetics) preying on people’s weakness & superstitions to exploit them is quite prevalent. Many Maulvis and madrassa teachers are also notorious for sexually abusing minor children who come to them for religious studies.

Some time back, maulvi Aijaz Sheikh in Kashmir was accused of raping scores of minor boys on the pretext of summoning jinns to drive away evil “nazar” from his so-called patients. A maulvi was arrested in West Bengal for molesting a minor inside a masjid, again under pretext of doing ‘black magic’ to cure her. In Ghaziabad, a maulvi and a juvenile madrassa student were arrested for raping an 11-year-old Hindu girl and keeping her locked in their madrassa room.