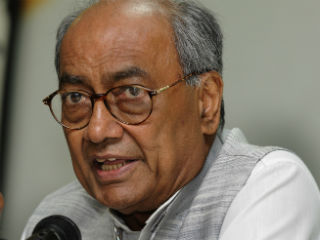 Senior Congress leader Digvijaya Singh, who has a habit of making slanderous statements against the Hindus, kicked up a storm on Tuesday after he claimed that people wearing Saffron are committing rapes inside the temples these days, reports ANI.

#WATCH Digvijaya Singh, Congress in Bhopal: Today, people are wearing saffron clothes and raping, rapes are happening inside temples, is this our religion? Those who have defamed our ‘Sanatan Dharma’, not even god will forgive them. pic.twitter.com/psAQcd1R7p

Digvijaya Singh, who is infamous for making controversial statements, made the remarks while addressing the Sant Samagam in Bhopal. The former Madhya Pradesh Chief Minister said people wearing Saffron clothes are the ones committing rapes inside the temple and this was not Hindu religion.

He added that it is a matter of concern that people are defaming ‘Sanatan Dharma’. Singh further added that and even god will not forgive those who are doing these things in the name of religion.

“Today, people are wearing saffron clothes and raping, rapes are happening inside temples, is this our religion? Those who have defamed our ‘Sanatan Dharma’, not even God will forgive them,” Digvijaya Singh said.

Digvijaya Singh, who is known to make illogical statements, had sparked a major row recently by claiming that BJP and the right-wing Hindu outfit Bajrang Dal are getting money from Pakistan’s spy agency Inter-Services Intelligence (ISI). The veteran Congress leader further alleged that non-Muslims were spying for ISI more than the Muslims and everyone should understand this fact.