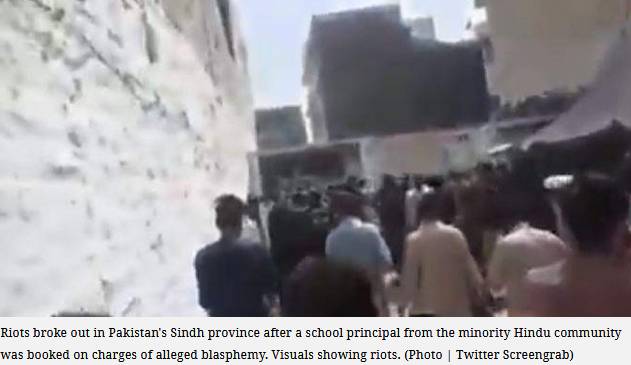 Shankar Narayan Meghwar | HENB | Ghotki (Sindh- Pakistan) : Riots broke out in Pakistan’s Sindh province on Sunday after a school principal from the minority Hindu community was booked on charges of alleged blasphemy.

Widespread protests erupted in Ghotki district after an FIR was filed against the principal of Sindh Public School on the complaint of Abdul Aziz Rajput, a student’s father who claimed that the teacher had committed blasphemy by uttering derogatory remarks against the Prophet of Islam.

Following the riots, protesters demanded the police to arrest the principal, who was identified as Notan Mal.

“Alleged accused, Notan Mal, is now in the safe custody of Police. Situation in Ghotki is back to normal within 12 hours by the grace of God. Fair investigation would be ensured, facts confirmed and justice would finally prevail In Shaa Allah!” he said in a tweet.

There were reports that the protestors attacked properties, including the school and vandalised three Hindu temples.

Pakistan Tehreek-i-Insaf (PTI) lawmaker, Ramesh Kumar Vankwani, who is also the head of the Pakistan Hindu Council, told the Dawn that the case has been handed over to Hyderabad Deputy Inspector General Naeem Shaikh for probe.

Vankwani said that the protesters had vandalised three temples, a private school and multiple houses belonging to the Hindu community.

He also urged the Police to register an FIR against people involved in the riots.

The Human Rights Commission of Pakistan shared a video of protesters breaking the infrastructure of the school and expressed concern over the situation. HRCP tweets as below+:

Alarming reports of accusations of blasphemy in #Ghotki and the outbreak of mob violence. https://t.co/PEc15iBsJi

“#Ghotki The authorities must take prompt action to quell the violence and ensure the safety of the school principal being targeted. The video circulated earlier is chilling: mob violence against a member of a religious minority is barbaric, unacceptable,” the rights organisation, HRCP said in another tweet+.

Videos of stick-wielding protesters were shared on social media in which they were seen vandalising a Hindu temple and damaging the school where the incident took place.

Following the incident, the activists and journalists took to Twitter to share videos and images of the rioting and appealed to the Sindh government to protect the minority Hindu community.

Ghotki Senior Superintendent of Police Farrukh Lanjar, while talking to reporters, said that Police were controlling the law and order situation in the area.

Protests were also held in surrounding towns, including Mirpur Mathelo and Adilpur, where demonstrators blocked roads and demanded that the police arrest the school principal.

Rights activist Sattar Zangejo said the Hindu community of the area was forced to remain indoors due to the riots.

According to reports in the local media, the rioters included supporters of controversial religious leader Pir Abdul Haq alias Mian Mithu, who is accused of involvement in forced conversion of Hindu women in Sindh.

“#GhotkiRiotAgainstHindus. Pakistan has a single agenda to hate & harm India and to eliminate Pak Hindus in a single bracket. The pig Pakistanis finished majority Hindus from Pak thru various attacks and conspiracy. 14% Hindus in Pak in 1947 has come down to 1.8% now. Unless Hindus in India don’t take a policy of Tit for Tat, there is no chance to survive Pak Hindus anyway.” Brahmachari posted a poster in his twitter handle+.