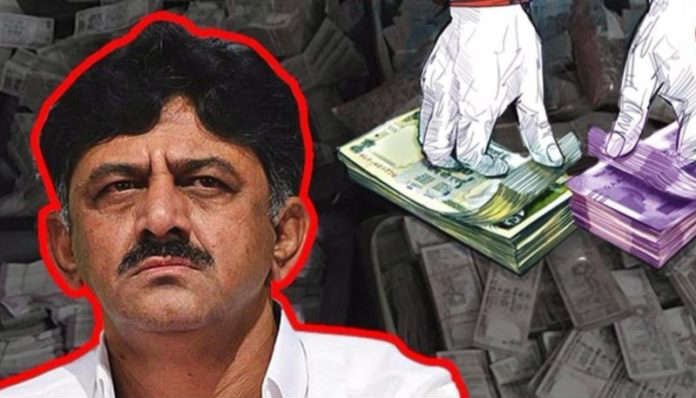 New Delhi : The Enforcement Directorate (ED) said on Friday its investigation till now has shown Congress leader DK Shivakumar, his family members and close associates owned 317 bank accounts collectively. It claimed it had discovered Rs 200 crore had been laundered and that there are benami properties worth over Rs 800 crore in his name.

It added that even his 22-year-old daughter has a transaction valued at Rs 108 crore in her name.

The submissions were made before special judge Ajay Kumar Kuhar, who was hearing the agency’s plea seeking custody of Shivakumar for five more days.

The court remanded the politician inED custody till September 17, observing that the ED’s interrogation could not be truncated when there was evidence with which the accused was to be confronted. “ED shall ensure that the accused takes all his prescribed medicines… examined after every 24 hours or earlier as and when required,” the court said.

Judge Kuhar also allowed Shivakumar to meet his family members for half-an-hour every day, besides his family doctor.

Calling the alleged money laundering a “threat to the national economy”, the remand plea pointed to the proceeds of crime going beyond the limit reached till now. “Instead of replying to specific questions, he wasted the time of the agency… Moreover, he took a long time to answer questions and took several breaks on grounds of being tired and sleepy.” The agency, however, claimed to have made “substantial progress” in its investigation.

The ED alleges that its investigation has revealed that Shivakumar generated large sums of money by misusing his position as an MLA and a minister in the Karnataka government. “This fact is corroborated with deposits of more than Rs 200 crore, including substantial amounts of cash in three bank accounts, statements of which were received during the investigation,” its remand plea said.

The ED argued that when confronted the politician was not in a position to explain the source of these deposits. “It is pertinent to mention that Shivakumar, his family members and close associates have maintained more than 317 bank accounts in at least 20 different banks,” the ED claimed.

Senior advocate Abhishek Manu Singhvi argued that his client Shivakumar was not well — a fact obvious from the medical record. Singhvi submitted that Shivakumar was in need of proper medical care as his blood pressure remained on the higher side. The defence counsel also argued that the remand sought by the agency could not be given mechanically as it had sufficient time to confront the accused with persons whose statements have been recorded. Shivakumar, Singhvi pointed out, was interrogated for seven to eight hours every day despite his poor health.

The ED claimed that the acquisition of several immovable properties in the name of his family members was detected. The agency claimed that a number of these properties were found to be benami and were attached under the Benami Transactions (Prohibition) Act. “It is pertinent to note that one person summoned during the proceedings is his daughter and it is found that a transaction to the tune of Rs 108 crore was made in her name,” the ED said.