TNN | New Delhi : A newly published archaeological study based on DNA analysis  of skeletal remains at the Rakhigarhi site in Haryana has claimed that inhabitants of the Indus Valley Civilisation (IVC) were a distinct indigenous people and challenges the theory of an “Aryan invasion” ending Harrapan culture.

The study says IVC people were a south Asian group of indigenous people whose continuity of existence is traced back to before 7000 BC. The study, which is based on the genome sample obtained from one individual whose skeleton was extracted, suggests no noticeable migration of people and claims to have dismantled the Aryan theory.

“This breakthrough research completely sets aside the Aryan migration-invasion theory. The skeleton remains found in the upper part of the Citadel area of Mohenjo Daro belonged to those who died due to floods and were not massacred by Aryans as hypothesised by Sir Mortimer Wheeler. The Aryan invasion theory is based on very flimsy grounds,” said Vasant Shinde, former vice-chancellor of Deccan College, and one of the authors of the study. The team of 28 researchers was led by Vasant Shinde of Deccan College of Pune and included Vageesh Narasimhan and David Reich of Harvard Medical School and Niraj Rai of the Birbal Sahni Institute of Palaeosciences among others.

The findings also lay bare the noteworthy progress the Indian culture had already made at the time, putting it on a par with the 2000 BC Mesopotamian civilisation.

Among its key findings, the study suggests that farming was indigenous to India, contradicting an earlier belief that it was brought to the region through migrations from Iran, and, most significantly, that Harappan genes are present in varying quantities in all south Asians.

The study argues that the DNA analysis shows that the people at Rakhigarhi, and the individual whose skeleton was examined, are from a population that is the largest source of ancestry for south Asians.

“The Iranian-related ancestry in IVC derives from a lineage leading to early Iranian farmers, herders, and hunter gatherers before their ancestors separated, contradicting the hypothesis that the shared ancestry between early Iranians and south Asians reflects a large-scale spread of western Iranian farmers east,” the study says, arguing that this contradicts significant migrations during the IVC period.

The study explains the spread of Indo-European languages to likely later migrations. “…a natural route for Indo-European languages to have spread into south Asia is from eastern Europe via central Asia in the first half of the 2nd millennium BCE, a chain of transmission that did occur as has been documented in detail with ancient DNA. The fact that Steppe pastoralist ancestry in south Asia matches that in Bronze Age eastern Europe provides additional evidence for this theory, as it elegantly explains the shared distinctive features of Balto-Slavic and Indo-Iranian languages.” The mature IVC was spread over northwest India between 2600-1900 BCE.

Speaking to TOI, Dr Niraj Rai of the Birbal Sahni Institute of Paleosciences, who conducted the genetic research on the Rakhigarhi skeletons, defended the extrapolation of data on the basis of one genome sample.

“One sample means a billion people. That is the power of genetics. We have conclusive data and evidence to prove that there was no Aryan invasion. Also, there is conclusive evidence that shows farming was indigenous to India,” he said. Rai also said that excavations found evidence that indigenous people migrated from the north to south India between 1800 BC and 1600 BC, likely following the collapse of the Indus Valley Civilisation by factors like drying up of the Saraswati basin.

The 28-member team of experts who collaborated on the study also said hunter-gatherers in south Asia had an independent origin and were authors of the settled way of life in this part of the world.

Breaking the Myth of Aryan Invasion and Aryans were not in India Origin…. 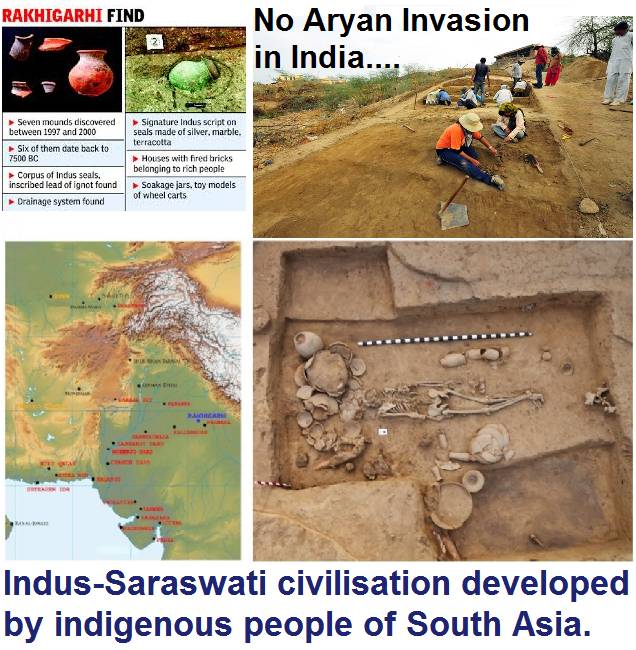 The preliminary findings of a DNA study of the skeletal remains of Rakhigarhi dated at 6000 years BP and reported in Economic Times on 13th June 2018 reveal that there was no trace of Central Asian ancestry.

Mr. Vasant Shinde, one of the authors of the study says, “This indicates quite clearly, through archeological data, that the Vedic era that followed was a fully indigenous period with some external contact.”

Read all contents in three parts as below:

Rakhigarhi reserach project finds that a genome from the Indus Valley Civilization is from a population that is the largest source for South Asians. The research authors also show that the population has no detectable ancestry from Steppe pastoralists or from Anatolian and Iranian farmers, suggesting that farming in South Asia arose from local foragers rather than from large-scale migration from the West.