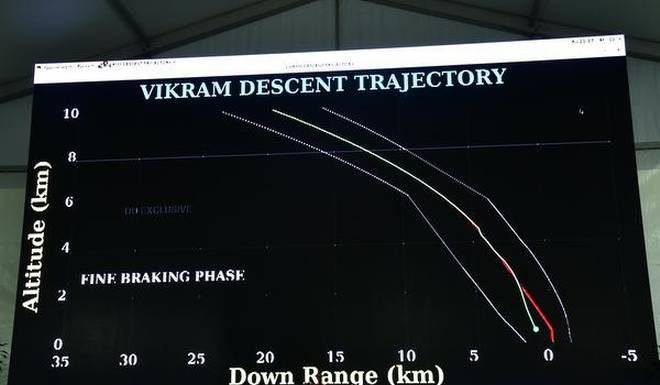 Indian Space Research Organisation (ISRO) has located Vikram Lander on the lunar surface after it lost contact during the landing on South Pole on the wee hours of Saturday morning.

Indian Space Research Organisation (ISRO) Chief, K Sivan to ANI:We’ve found the location of #VikramLander on lunar surface&orbiter has clicked a thermal image of Lander. But there is no communication yet. We are trying to have contact. It will be communicated soon. #Chandrayaan2 pic.twitter.com/1MbIL0VQCo

There is no communication yet with the Vikram Lander and ISRO is trying to establish contact with it.

In the wee hours on Saturday, the nation sat glued to their television sets in anticipation. Chandrayaan-2’s landing module had gone silent after Vikram the lander, went silent when it was merely 2 KMs from the landing surface of the moon. At 2:40 AM, ISRO chief K Sivan announced “Vikram lander descent was as planned and normal performance was observed upto an altitude of 2.1 km. Subsequently, the communications from the lander to the ground station was lost. The data is being analyzed”.

Unfortunately, as the entire nation stood with ISRO to experience a spectacular journey of India’s first attempt to land at the lunar south pole, some petty individuals displayed their sheer negativity and arrogance over social media.

The long night and the next morning also showed that some individuals exist only to mock and pull others down at the very first opportunity. In fact, NDTV journalist Pallava Bagla heckled an anxious senior scientist at ISRO who had come out to address the media to explain about the failure in communication of the Vikram Lander.