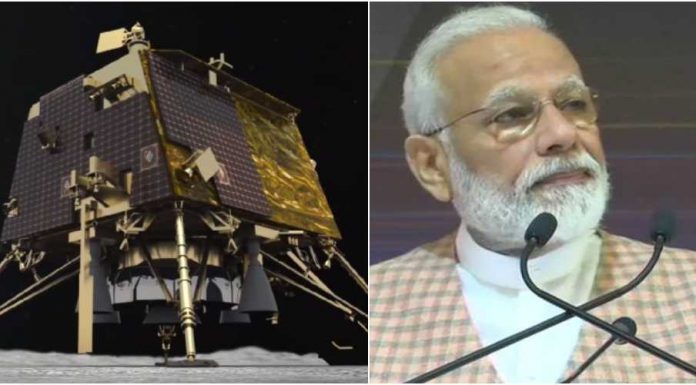 India’s Chandrayan 2 mission saw a setback last night as the Vikram lander lost communication with mission control when it was just 2.1 kilometres away from landing on the lunar south pole. PM Modi, who had left the Mission Control venue last night after being briefed by ISRO chief, arrived in the morning today to address the scientists of ISRO.

PM Modi said to the ISRO scientists that they are the people who fight, live, win for mother India and dedicate their lives and dreams for mother India. He added that he could see the sadness in the eyes of the scientists last night and hence he had left without saying anything.

PM Modi stated that we came very close, but we still need to cover more ground in the times to come. He added, “Every single Indian is filled with a spirit of pride as well as confidence. We are proud of our space programme, our scientists, their hard work and determination which has ensured a better life not only for Indian citizens but also for people in other countries. Millions of people have access to a better lifestyle, healthcare and opportunities because of the scientists at ISRO.”

Reassuring the scientists that India will not back down after an initial setback, PM Modi added that when it comes to our space programme, the best is yet to come. “There are new frontiers to discover and new places to go to. We will rise to the occasion. To our scientists, I want to say, India is with you. You are exceptional, you have made an incredible contribution to India’s progress, you have given us your best and you will give us several more opportunities to smile”, said the PM.

“Aap log makkhan pe nahi, Patthar par lakeer kheechne wale log hain”, PM Modi said, “You ventured where no one have ventured before”. PM Modi also thanked the family members of the scientists for their sacrifices and support.

“Resilience and tenacity are central to our ethos. In our glorious history of several thousand years, we have faced a number of moments that may have slowed us, but have never vanquished our spirit. We have bounced back again and have gone on to do spectacular things. This is the reason our civilisation stands tall”, said the PM.

PM Modi further added, “I can proudly say that the efforts were worth it and so was the journey. We worked hard and travelled far, and those teachings will always be with us. We will one day look back at our journey with great satisfaction. The journey will make us stronger and better. ISRO itself is an example of a civilisation that has never called it quits.”

“Every struggle, every difficulty and every challenge teaches us something new, enables us to strengthen our efforts. Science is the best teacher of knowledge. There are no ‘failures’ in science, there are only experiments and efforts. Every effort lays the foundations of new possibilities and makes us realise the power of our limitless potential. The final phase of the Chandrayan mission may not have been as per our expectations, but please remember that the journey has been glorious and full of life.”

PM Modi asserted that throughout the journey, the entire nation has been proud and happy. Even now, our orbiter is moving around the moon in all its glory, without a glitch.

PM Modi reminded the scientists that it is due to their efforts that India is now among global space powers. “It was you who have reached Mars on their first effort. It was our Chandrayan that informed the world that there is water on the moon. We had launched over 100 satellites together. When ISRO has an entire encyclopedia of success, a couple of setbacks cannot take us out of trajectory”.

PM Modi cited a phrase from the Upanishads, “Vayam Amrutasya Putrah (we are the children of immortality) and there are no failures for us.” PM Modi added that being satisfied or dejected by results is against the very nature of science. He added that continuous efforts are the inherent quality of science and science even searches for new opportunities for fresh efforts from every result. He emphasised that this inherent quality is in the blood of the scientists and that is why the nation trusts and feels proud of them.

PM Modi concluded by saying that he has not come there to advise them but has come to seek inspiration from the stalwarts who turn dreams into realisation and disappointments into victories. PM Modi’s full address at ISRO headquarters can be accessed here.