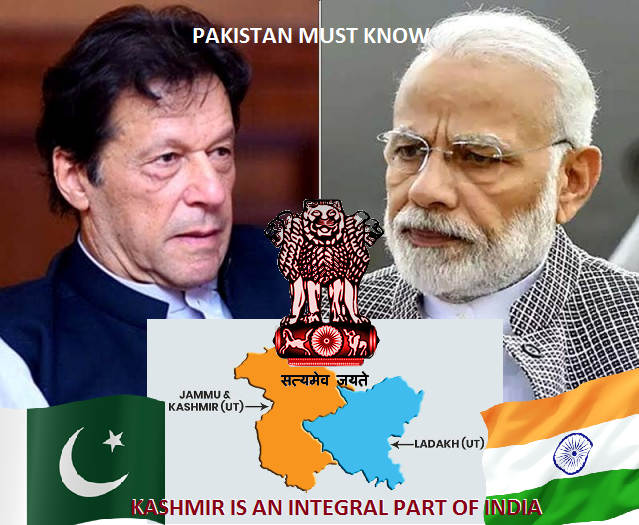 Upananda Brahmachari | HENB | Haridwar | Aug 11, 2019:: The bankrupt and globally cornered Pakistan is now using its only lifeline of Hindu-phobia to win the game of Kashmir. Most deliberately, Pakistan is creating Hindu-phobia to perpetuate Jihad in Kashmir.

The abrogation of Art 370 and 35 A from Indian Constitution and controlling the Jihadi situation in the Kashmir valley by Indian military has cast a traumatic spell over the epicenter of Jihad, i.e. Pakistan.

Though the Political parties, Media houses and the Islamist forces in Pakistan are jointly trying an upheaval in the country to make another genocide in the country to finish the rest of minority Hindus and Sikhs in the arised situation; it is quiet difficult to do that as the global forum like UN and the major powers like US, UK, Russia, China and France finally welcomed the decision of India for the removal of Art 370 and watching the ill developments there in Pakistan.

By this time Pakistan reached in the conclusion to end all bilateral relations with India. India reciprocated all those as a composed counterpart.

From the very day of Aug 5, when in Rajya Sabha (upper house of Indian Parliament), Indian Home Minister Amit Shah declared the removal of Art 370 and tabled the proposal of bifurcating the State of Jammu and Kashmir as two union territories viz J&K UT and Ladhak UT; the Pakistan PM Imran Khan, his party leaders, Jihadi leaders like Masood Azhar and Hafiz Saeed and obviously the Pakistani media started an anti-India campaign and provocative Hindu-phobia, only to exist anyway in a volatile situation embarked in Pakistan due to a possible end of subversive Jihad in the Kashmir valley.

Leave the statement of Jihad leaders and anti-Indian political parties in Pakistan; the so-called secular media in Pak like Dawn, Tribune and others started hatred campaign against BJP -the ruling party and RSS -the right wing Hindu organisation in India with crude lies and concocted facts.

If anybody goes into the articles and reporting of Dawn on recent Kashmir situation, he will be shocked with its half baked truth and blatant lies as reflected so many times. Dwan made head lines, editorials and op-ed like India’s ruling BJP to revive plan for Hindu settlements in Kashmir; Courage lies in the hearts of Kashmiri women who dream of freedom; How Modi used Kashmir to stoke nationalist sentiment and woo India’s Hindu voters; .What are Pakistan’s options and challenges after India’s revocation of Article 370 in occupied Kashmir?; ‘Dear Modiji, the people of Kashmir are not with us’; From India to Bharat and so on.

Meticulous studies of the above articles or reporting obviously expose the common Islamic interest on Kashmir in Pakistani politics, media and terrorist outfits only to exploit the common Kashmiri Muslims in the valley through the expansion of Islamic fundamentalism and Jihadi proliferation. In that direction, Pakistan already released many Jihadi leaders from custody so that they can unleash Jihad (read Ghazwa e Hind) in India!

It went extreme anti-Indian stance and shaped as out-breaking Hindu-phobia, when Pakistani Prime Minister Imran Khan took his twitter handle to open his mind in the series of tweets as “I am afraid this RSS ideology of Hindu Supremacy, like the Nazi Aryan Supremacy, will not stop in IOK; instead it will lead to suppression of Muslims in India & eventually lead to targeting of Pakistan. The Hindu Supremacists version of Hitler’s Lebensraum.“

Thinking attacks of words on India and BJP are not sufficient in this row, PM Imran Khan came down heavily on RSS and tweeted again, “The curfew, crackdown & impending genocide of Kashmiris in IOK is unfolding exactly acc to RSS ideology inspired by Nazi ideology. Attempt is to change demography of Kashmir through ethnic cleansing. Question is: Will the world watch & appease as they did Hitler at Munich?“

In a retaliation to Pak PM as above, RSS ideologue and BJP member in Rajya Sabha, Ram Madhv replied, “Heights of frustration from d ringleader of global terror empire Pakistan. Threat to democratic world is from Pak-sponsored Jehadi terror, not from India. We have undone Jinnah’s Two Nation theory n Sheik Abdullah’s Three Nation theory today. Can IK end religious fascism in Pak?“

As a matter of fact, Religious fascism in Pakistan is boiling more in Pakistan in post removal of Art 370 in India. The Jihadi fanatics started fresh attacks on Hindus and Sikhs in Pakistan discretely. On Aug 10, the statue of Maharaja Ranjit Singh was vandalized by Tehreek-Labbaik Pakistan goons+. The state sponsored Jihadi terrorism in Pakistan can’t be hidden anyway in Pakistan with all efforts. 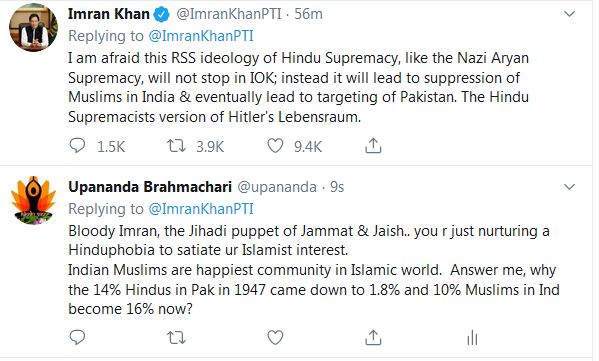 Actually, Pak PM Imran Khan is acting as a Jihadi puppet of Jamaat-ud-dawa and Jaish-e-Mohammed, He is nurturing a Hindu-phobia to satiate his Islamist interest to retain the Pak power. This trend is highly risky for the non-Muslim Hindu-Sikh-Christian-Ahamedian minorities in Pakistan.

The proxy war of Pakistan against India and sponsoring cross-border terrorism will see an end soon. And Pakistan has no power to start formal warfare with India. factually, financially ruined Pakistan is incapacitated to start any war against India.