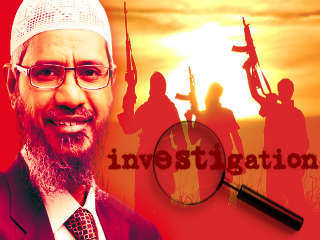 Cornered and slammed for making controversial speeches inciting communal tensions, Islamic preacher Zakir Naik on Tuesday apologised for his recent remarks directed towards Hindus and people of Chinese origin in Malaysia. And while he claimed he is not racist, Malaysian Police barred him from delivering public speeches anywhere in the country.

Naik had been facing enormous flak for reportedly asking Malaysian Chinese to “go back” as they were the “old guests” of the country. He had then compared Hindus in Malaysia to the Muslims in India, saying that the Hindus in Malaysia enjoyed more than 100 per cent rights compared to Muslims in India. For these statements, Naik was barred from delivering any speeches in Melaka, the seventh state in Malaysia to ostracise him. On Tuesday, he issued an apology. “Even though I have clarified myself, I feel I owe an apology to everyone who feels hurt because of this misunderstanding. I do not want any of you to harbour ill feelings for me,” he was quoted as saying by Malaysia’s Star Online. He also said that he was being labelled as a racist and claimed that some of his statements have been taken out of context.

Shortly after his apology, however, a Royal Malaysia Police official confirmed that Naik has been barred from making any public speeches anywhere in the country. “Yes. Such an order has been given to all police contingents, and this was done in the interest of national security and to preserve racial harmony,” Datuk Asmawati Ahmad of Royal Malaysia Police was quoted as saying by Malay Mail.

Wanted in India on charges of inciting extremism through hate speeches and on charges of money laundering, the noose around Naik has been steadily tightening in Malaysia as well. He is being investigated for making speeches that could disturb social harmony and cause communal tensions. Authorities in Malaysia have assured strong and affirmative action if he is found guilty.